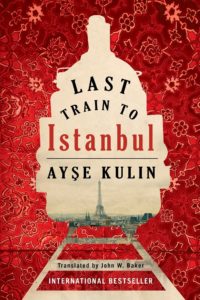 “All he was now was a wretched number and old, very old, even older than his father, whom he referred to as “the old man.” He was now 3,233 years old.”
― Ayşe Kulin, Last Train to Istanbul

I love reading in the night time. There is something extraordinary in the kind of solace I find in this peaceful combination – the darkness of midnight, my Kindle Paperwhite, the subtle snoring of my daughter, the mild noise emanating from my husband’s laptop; the sound of the TV shows he watches both assuring and chaotic.

I often look for different genres to read and in one such search for my next read, I came across the book Last Train to Istanbul. The blurb seemed interesting and the cover was alluring too. Being a fan of different cultures, I quickly warmed up to the book and downloaded it.

Last Train to Istanbul is the story of love torn apart by religion and race. Selva is a young and stubborn Turkish girl who is the daughter of a notable Ottoman Pasha. She is the apple of her father’s eyes; his prized possession until she commits the blasphemy of falling in love with a charming Jew, Rafael Alfandari.

Rafael Alfandari who is both well-bred and cultured is a Jew; the only thing which instantly disqualifies him in the eyes of the revered Pasha. The young lovers refuse to succumb to family pressures and instead flee to the welcoming and broad-minded metropolis of Paris.

All goes well, until one fine day the Nazis decide to disrupt their peace and harmony and invade France. Young Selva gets increasingly worried about Rafael and their little son, Fasil as the Gestapo starts rounding up Jews all around France to send them to the dreaded “labour camps”.

It is in this situation that Selva finds herself, outcasted by family and tortured by the dictates of a vile fascist. Will love win over war? Will humanity win over race and religion? What will become of Selva, Rafael and young Fasil? To know this and much more, read this soul-stirring novel today.

The plot of Last Train to Istanbul is good and compact. Though there are a number of smaller subplots included to add variety and spice, the overall effort is overwhelming. The story moves at a steady pace and there is a lot to look forward to at any given point in time.

The writing style of the author is such that she very easily evokes feelings of fear and memories of separation. The slight undertones of fear and uncertainty over future do well for keeping the interest of the reader intact. In the process of turning pages after pages, the reader and the characters become one; their fate and happiness made entwined by the pen of the writer.

The characters are an amusing bunch and even though they hail from different backgrounds and countries, they all have a certain appeal about them which makes them familiar and relatable to the reader. Selva, Resat Pasha, Macit, Rafael, and Tarik are characters who will stick around for a long time after one is done reading the book.

Personally, I haven’t read a World War 2 historical fiction in a long time and so Last Train to Istanbul came as a refreshing (even though it was a bit gloomy) read. In addition to that, reading about Turkey and its culture was a new and enjoyable territory. There is a lot of history which I learned from this fiction novel and that is another thing which made the book dear to me.

Was the Climax good?

The climax was a bit buzz-kill, after such a lengthy play at building up the suspense and setting up the stage, it felt a little rushed with the end played out a little too easy to believe. Towards the end, things quickly fell into place and lo and behold, we have our end. Nopes! The climax didn’t sit well with me.

Overall though the book is an extraordinary read. Since it is a translation that I read, I can never know how the original (in Turkish) book was, but Last Train to Istanbul, in my opinion, is a book I would recommend to people. The story is a sad but soul-stirring one and I honestly think that it should be made into a movie.

That being said, I rate the book 4.5 stars out of 5 in the entertainment quotient and recommend it to all my readers.

Can’t wait to read it? Buy Last Train to Istanbul from the link below!