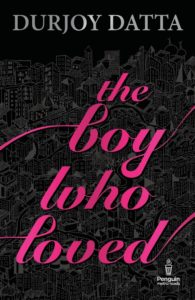 I had pre-ordered my copy of  “The Boy Who Loved” in the early days of May 2017. The book was released on 29th May but being a small-towner, I only got my copy on 2nd June. So, I once again sat down like a girl giving her board examinations and read the close-to-300 pages in one day. Today, I am writing this review.

“We bunked the last period and went to the planetarium. The universe witnessed our first date.”

Judging by the book cover and the blurb, I did not know what to expect. The blurb said that the story was dark, edgy and quirky and that’s what I expected it to be. But I found the story more gloomy than dark. Not that I am complaining, it was a highly satisfying read with well thought of plot and strong characters. But before I dig into the review, let me tell you a little about the story first.

“The Boy Who Loved” is the story of a school going boy called Raghu Ganguly who lives in Delhi with his family. On the outside, he is just your regular guy – loving parents, good academics, a respectable family with decent means. But that is just a façade. Deep down Raghu harbours a secret guilt – that he had let his friend down; he had let him die. The guilt gnaws at him from the inside, killing him slowly and painfully every day until he comes across Brahmi who promises hope and a new life.

But life throws unforeseen challenges at him every second day. Will he be able to find hope again? Will Raghu find solace in Brahmi; a girl who is just as broken as he is? To know what happens in this unconventional love story, read the novel today!

I liked the plot of the book, there are various subplots which run parallelly to the main plot. The story is told in the first person by Raghu. It traces his life and the story of people around him. There is a lot of drama and gloom and both the elements are delivered quite well. Durjoy has yet again ventured into a new genre and done so with finesse.

The characters of the book are the good too. There is not one character whom I can find faults with. They all are well thought of and have a certain depth about them. I liked the way the characters are all different shades of grey. Another thing which is quite brilliant in this book is that despite the overwhelming number of important characters, they all appeal to the reader and blend in with the story perfectly. It is difficult to imagine the book without even a single one of them.

The book maintains a fast pace in the initial chapters but slows down later and that was one thing which I did not like about the book. The story seemed a little stretched in a few places. I also felt that the book could have been completed in around 250 pages, the 50 additional pages could have been easily avoided. There were a lot of times when the pages were moving but the story was not and that is what gave the story its slow pace.

The climax of “The Boy Who Loved” was unconventional and unpredictable. Since it’s mentioned in the blurb that the book is part 1 of a two-part romance, I did not think it will end this way. The unpredictable end was surely a bonus though. The last few chapters just before the end felt dragged somehow and that was another issue I had with the book.

Another thing which disappointed me was that despite coming from the house of Penguin India, the book had some editing mistakes. That was totally unforgivable for such an esteemed publisher. Overall, the book is exceptionally well written and it has heralded Durjoy’s foray into serious fiction. My final verdict – go read this book if you are a fiction lover, even despite all its minor flaws it’s a great read, one which will be enjoyed by all fiction lovers equally.

Buy “The Boy Who Loved” from the links below.