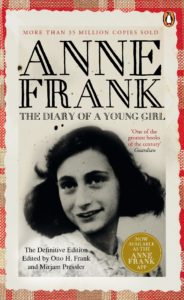 “When the world was torn by grief and war.

When the Jews were killed in German halls.

A group of eight went into secret hiding.

To save themselves from atrocities and chiding.

“….announcements of their deaths appears in the papers frequently. These outrages are described as “fatal accidents”. Nice people, the Germans! To think that I was once one of them too! No, Hitler took away our nationality long ago. In fact, Germans and Jews are the greatest enemies in the world”

“Who has inflicted this upon us? Who has made us Jews different from all other people? Who has allowed us to suffer so terribly up till now?”

I am sure many of us would have heard of her and her diary which became famous by the name of The Diary of a Young Girl. If you have heard about her, then I must say that you should read the book if you haven’t done it already. For those of us who haven’t heard about her, Anne Frank was a girl who lived during the World War 2 in the Nazi Germany occupied Holland (Now Netherland). Because of the atrocities of Nazis against the Jews, the family of Anne Frank, along with another Jew family and a Jewish doctor, went into hiding together.

They lived in hiding for 25 months before they were discovered by the Gestapo and sent to the concentration camps to die, where only Otto Frank, Anne’s father, survived. After the war, he discovered Anne’s diary and got it published by the name The Diary of a Young Girl. The Diary of a Young Girl is the 13 year old’s personal diary wherein she has written about her daily experiences in the hiding from 14th June, 1942 till 1st August, 1944 a few days before she was discovered by the Gestapo.

The Diary of a Young Girl, as many critics say, is dull and boring because in majority of the entries she speaks of her trifles with her family – Mom, Dad and sister Margot and with the other family – the Van Daans (name changed). Critics have said a lot and will say a lot and some of the points they mention cannot be denied. But I am here to tell you why one should read this book. The book has great historical value and I believe that this diary is Anne’s gift to human race and the world, the very world which tore her life apart and couldn’t give her a fair chance at her own life.

In those dark days, she wrote of hope; of how she wanted to be a writer; of how she would never be just another housewife; of how she will treat and bring up her children.  She mentions of love and the time she will be able to see the sun and moon and enjoy the beauty of nature again as it is something which nobody can deny her. In one of the last entries in The Diary of a Young Girl, she writes about the hope that the war may soon end and she might be able to go to school in October, 1945. It was so sad to read all that, because I know how the story ends. That she had to go is so sad , for she would have been a great writer. When I read about her, the Coldplay’s song “Paradise” comes to my mind.

“When she was just a girl, she expected the world, but it flew away from her reach, so she ran away in her sleep”.

I want to write much more, but space is a major constraint here and in the end I would just like to quote these words by John F. Kennedy –

“Of all the multitudes who throughout history have spoken for human dignity in times of great suffering and loss, no voice is more compelling than that of Anne Frank”