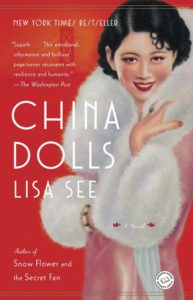 Lisa See is an American writer and novelist who has to her credit a number of bestsellers including Snow Flower and the Secret Fan, Peony in Love, Shanghai Girls, Dragon Bones, Dreams of Joy and “China Dolls”.

I came across this book while browsing through the Goodreads’s best of 2014 lists. This book released in 2014 has also been listed on the NewYork Times bestseller list of hardcover fiction.

“China Dolls” is the story of three young girls – Grace Lee, Helen Fong and Ruby Tom and is based in the now-forgotten world of Chinese American Nightclubs and performers which existed in America in the 1930s and 1940s.

The book also has as its background theme World War 2 and the implication which it had on the lives of these three girls.

Grace Lee is a Chinese who flees from the confines of her abusive home in Plain City, Ohio to make it big in the city of San Francisco.

Helen Fong is a Chinese, born and brought up in the China Town part of the city of San Francisco who lives with her entire family in an ancestral compound.

Ruby Tom (real name Kimiko Fukotomi) on the other hand is a Japanese passing off as Chinese in the event of growing distrust of the Japanese among the Americans and the Chinese alike in the wake of the Japanese attack on China.

They are living happily together – working and having their own share of fun but one particular incident changes it all. The attack on Pearl Harbour by the Japanese makes life hell for her and for all Japanese living in America.

So how long will Ruby be able to pass off as Chinese? Who will betray her to the FBI and why? What will happen to the wonderful world of these three friends?

To know this and much more read this dramatically exciting novel today!

The best part of “China Dolls” is indeed its plot. The story is unique and with the backdrop of the Pearl Harbour attack, it becomes all the more interesting.

The historical fiction element is simply superb and makes the book still more charming for there is something in reading about glamour dipped in a war which attracts the reader to no end.

The main plot is beautifully complimented by various subplots which document the lives and point of views of the three girls individually.

The book starts with a quotation by Buddha: “Only three things cannot be long hidden: the sun, the moon, and the truth” and it is in these three distinct elements or phases that the author organises the book.

The characterization of each of the main characters is vivid and in-depth because each girl has her own aspirations, needs, fears and insecurities.

How these insecurities play a part in shaping the future of not just them but also the other two is what the book is all about.

All in all, “China Dolls” is an exceptional read full of drama, entertainment and emotions and I, therefore, recommend it to all my readers.

Read this book if you are fond of reading about–