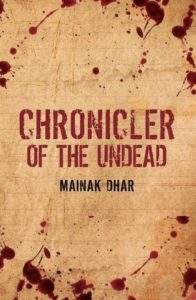 Mainak Dhar is the bestselling author of the “Alice in Deadland” series. Besides the super hit series, he has also penned other books most of them being zombie fictions. “Chronicler Of The Undead” is the latest book from his kitty and judging by his previous works is not the best of him I have read so far. The story is based in the quaint hills of Guwahati.

The hero of the story who is also the narrator is an ex-serviceman who had to leave the army due to his lost leg. Having found a prosthetic leg, he found a job as a caretaker of a beautiful mansion atop a hill which belonged to a rich businessman. When the breakout happened, this was where the author was stationed and this is what played a part in his being alive when all around they were only the dead.

The narrator was once an aspiring writer who had been turned down many a time by various publishing houses. But after the apocalypse, his writing was what kept his sanity alive. Since he did not find a single soul alive, he took upon him to chronicle the rise of the dead and started writing his diary. “Chronicler Of The Undead” is thus his diary and every chapter is a separate entry.

The dead here are called the “Moreko”; a term which means the same in Nepali and which the author once found engraved on a tree down the hill. The narrator who once thought that he is the only surviving soul is in for a shock when he is rescued by a couple of armed gentlemen who were a part of a much bigger community. What follows is a disaster in the making and soon the “Moreko” are not the only enemy that he has.

So what happens to the hero? Will he survive the armed men? What has he discovered? To know this and much more, read this exciting new book today!

The book starts on an interesting note and I really like the way the first few chapters play but nearing towards the end it becomes a little monotonous and dull. The plot and subplots are quite similar to other zombie fictions I have read and there is not much unique to offer except perhaps the Guwahati setting and the “Moreko” name tag. The main character is decent but I would have loved it much more if he had a past life and there was some kind of emotional connect with him. The climax is action-packed and a pleasant break from the monotony.

Overall, “Chronicler Of The Undead” is a decent read and I would recommend this as a good fiction read to all my readers. If anyone is specifically looking for zombie fiction, you won’t find much uniqueness here. I hence end this review by rating it three and a half out of five stars.