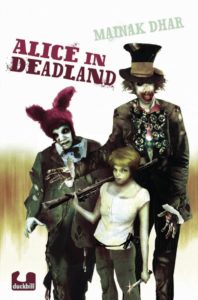 This is the first book I’m reviewing that I’ve not bought with my own money. I hadn’t imagined this task would be so difficult. I was caught between logic & emotion. My heart told me that I loved this book and should rate it accordingly but my mind said, “You are reviewing a book received from the author. If you rate it highly, your readers will think that you are doing it to please him.” But like always, I chose to follow my heart. If you believe that this is an impartial review, read further; or else you can check out other reviews on this site but I promise you one thing – You are going to miss out on a great book.

Alice in Deadland is set in the post-apocalyptic world; the world where the dead have risen. The protagonist is a young American girl named Alice who lives in the destroyed suburbs of New Delhi, now called, The Deadlands. She is 15 years old and a master sniper. The story sets into motion when Alice accidentally discovers a secret zombie settlement hidden in the underground tunnels of The Ruins. The secrets that Alice discovers inside those tunnels and the powerful people behind those secrets become the plot of the book. A major part of the plot is about how Alice is affected by those secrets and how she is forced into the role of a leader and the protector of humanity. To realise her mission she has to fight against many powerful enemies like the Zeus, the Red Army & the Central Committee.

The characters in this book are well portrayed.  I particularly loved the characters of Alice, the Queen of Zombies & Colonel Dewan of the Zeus Army. All the characters do justice to their roles and I didn’t find anyone to be out of place. Alice reminds you of Katniss Everdeen in The Hunger Games. The way the author describes New Delhi if it were destroyed, is very vivid. Many major landmarks have been used in the narrations which make the imagination livelier.

The novel is written with a sequel in mind and the climax befits it. It will leave you wondering and waiting for the sequels.

Coming to the negatives, I would say the title & the cover are major reasons why this book will not catch your attention. The title sounds funny as if it is a spoof of the famous “Alice in Wonderland” and the cover of the book is boring. The fight narrations too could have been more interesting.

My verdict – this is a must read for all those who love to read fast-paced & high action novels with powerful characters. Read this book to find out –

“What secrets did Alice discover in the secret Zombie base?”

“What was the true reason behind the apocalypse?”

“Why does the Central Committee want the Queen of Zombies dead?”

“Can Alice save Mankind from destruction?”