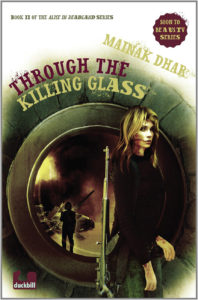 Zombies are one of the favourite subjects of horror writers and film directors. A list of all the movies, TV series and books on zombies would fill up many pages. Amongst the best, we have movies such as Dawn of the Dead, 28 Days Later, Night of the Living Dead, TV series such as The Walking Dead, Dead Set, and books like As the World Dies, Zone One, Feed, Undead etc.

In spite of numerous works on the subject, the theme, more or less, remains the same. The world is engulfed by an apocalypse, and the dead have risen; a few scattered survivors fight the zombies, and among themselves, and achieve redemption, in the end, one way or the other. The characteristics of zombies remain almost similar; shoot them in the head to kill them, their bite is infectious, they are pretty much brainless, etc.

If you haven’t read ‘Alice in Deadland (Alice #1)’, I’ll give you just brief background; New Delhi, now Deadland, is in ruins. Swarmed by Zombies, and attacked by Chinese red guards, the people live in perennial fear. Alice, a young girl of 15, protects her people and in the process turns into half-human-half-zombie, and so she is revered by both humans and zombies alike.

Through the Killing Glass is the second book in the Alice series. The zombies, who once had terrorised the people of Delhi, are now tamed and in control of Alice. Everything seems peaceful and the people are living happily. But the red guards who were thwarted earlier, are done with licking their wounds and planning another attack, under their new leader Commissar Chen. This time Alice is unbeatable; she has the tactical skills of a human and the strength of a zombie. But the Chinese have a hidden weapon to tackle Alice. Faced with the external onslaught and the boiling politics within her community, can Alice protect her community once again? Or will she perish in the attempt?

“Alice knew that Li was a more formidable opponent than any human she could have faced. Like Alice, Li would not tire, would not feel pain, and would not stop unless Alice managed to put a knife or a bullet in her head.”

Through the Killing Glass, unlike the first part, focusses more on internal strife, politics and backstabbing rather than the action-packed battles between humans and the undead. The author has emphasised more on strategy and tactics than on brute force and gory deaths. It is interesting in a way, but I would have preferred a little more action in the book.

Alice’s character, as before, is great. The fusion of human and zombie characters in her is brought out beautifully; she has matured mentally and grown physically stronger. Many of the characters from the previous book – Satish, Arjun, Hu, Bunny Ears and Hatter – are an integral part of this book. Mainak Dhar has intricately developed new characters – Arun, Chen, Red Queen, Danish, etc. – which are brilliant.

In the end, we are again left wanting for more, for which we’ll have to read the next book. I enjoyed reading Through the Killing Glass and hope you will too.