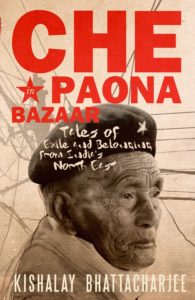 They say that the beauty of India lies in its diversity and that diversity is what holds us together.

A few days back, I chanced upon a foreign national who was an overly enthusiastic Bollywood fan and truly believed that no matter how different we are, Bollywood is one force which truly binds us together.

Little did the well-intended foreigner know that there exists a state in our country where Bollywood is banned, where the last time a Bollywood movie graced the screens of a cinema hall was way back in 1999 when Sanjay Bhansali directed Hum Dil De Chuke Sanam.

This state which finds itself caught between the everlasting rife between the tribal-led militants and the army; a state where even traditional Indian wear is banned and the cost of having a Hindi mobile ringtone, may well be paid with one’s life.

It is this state which the author so lovingly and passionately talks about, bringing forth not just the reality of the ongoing war but also the vivid details of a life of a commonplace Manipuri.

The author does a beautiful work of shedding some light on the state, which I believe, for many other readers just like my ignorant self, is still unknown territory and synonymous with the word “North-East India”.

Only when one delves into the deeper precincts, does one experience Manipur in its full despondency as well as its full glory.

“Her ex-lover called up from Delhi-she was shopping and wanted to send Eshei something…. And suddenly I thought it is Republic Day, shops are closed. So how would she buy, but then I remembered that she is in Delhi. The place where R-Day is celebrated, not banned or mourned. In Manipur, we are forced to mourn on 26 January, 15 August and every time the prime minister or president or some high profile political leader visits….

They are waging war, the “war of independence and self-determination” from the “colonial” India. But what about us? ……… the common people who want good roads, a salary without different percentage cuts, drinkable tap water, electricity, good schools, security.”

The author touches upon various aspects of the state, including sensitive issues like militancy, insurgency, the exploitation by the army, rapid increase of HIV AIDS and other such miseries.

On a positive and vibrant note, the author also details the various cultural aspects like the brief history of the state, its food and cuisine, its clothes, its dances and sports, music and arts etc.

Che in Paona Bazaar captures the true essence of Manipur in totality and not just the one read about in newspapers.

The book also talks a little about Shillong, Kohima and Assam, thus giving an overall foray into the northeast Indian way of life.

Che in Paona Bazaar is an exceptional read and I, therefore, recommend it to every Indian.