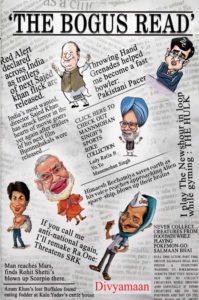 Divyamaan is an exceptionally talented writer. Why do I say this? Because of this ceaseless laughter initiator which I was just holding in my hands a few hours back. So what is this device that I am talking about? Well if you are not new to my rather eccentric introductions, you would have guessed it right. I am indeed talking about this hilarious piece of fiction which goes by the name “The Bogus Read” and is penned by Divyamaan; the very gifted writer that I was just talking about.

So what is this book and why is it called “The Bogus Read”? I too was not immune to these questions and seriously wondered what the title could possibly mean. I had my own reservations with this new author because let us be frank, there is always a shroud of uncertainty around new authors which is hard to shun.

Call me judgmental but yeah, that has always been the case with me. “The Bogus Read”, though, breaks all your prejudices against a debut author. This book is such an exceptional read that it is impossible to comprehend that it is written by a debut author.

The book is a satire on the present Indian nation. It takes us to a faraway galaxy where on a liveable planet just like our Earth, there are two nations India and Pakistan, perpetually hostile towards each other. After having lost to India thrice in 3 different wars, Pakistan has now come up with a master-plan. It plans to corrupt the minds of Indian masses and then capture India entirely. They partially succeed but then the government takes note and plans a comeback. With a rather odd and incompatible team of half-brained celebrities, raucous politicians, crazy media-persons and a bunch of immature but determined college students, all under the supreme command of Mr N, India develops a counter strategy.

What happens before and after this fiasco is a lovely mess of ceaseless laughter and carefree amusement. This book is an unstoppable laughter monster, one which will make your stomach rumble and your jaws pain from the after effects of it and hence it is mandatory that I pre-warn you about all of its side effects.

“The Bogus Read” is written in an absolutely entertaining fashion and that makes it one of the best reads of 2017 for me. I admire the author’s wit and skill in penning such a hilarious read. The satires are almost on all popular topics of today – Indian politics, education, and cinema and television industry. The names used in the book (of known people from these spheres) are almost very similar to their real names which make you admire the guts of the author as well.

There are multiple subplots in “The Bogus Read” but they all link back to the main plot effortlessly. I also admired the fancy and hilarious take on various characters which in a way forms the core of the book. I also liked the concept of the book. This is such a different and difficult genre to write on and Diyvamaan has done that really well. The weave of fiction around the ground realities makes the book both an entertaining and an eye-opening read. The message which the author intends to send is also delivered effectively.

Thus overall this book is a “must not miss” read and I hence recommend it to all my readers. That being said I also want to suggest my readers to go read it with a free mind and not set their expectations too high (given my ratings and praise for the book). For when that happens, high expectations are not necessarily met and it spoils the reading pleasure. I end this review by rating “The Bogus Read” 5 out of 5 stars and with a “must read” recommendation.