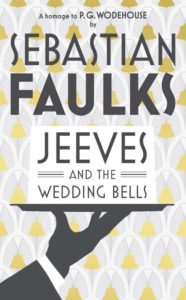 “Jeeves and the Wedding Bells” is a tribute by Sebastian Faulks to the evergreen legend, P.G. Wodehouse. This book in a most humble way seeks to revive one of the most legendary characters in the world of fiction and I must say that Sebastian Faulks has to a large extent achieved what he had set out to achieve. The super successful character duo of the gentleman Bertie Wooster and his butler Jeeves return to the literary landscape after almost forty years. The characters are often hailed as one of the best and most popular creations of the man Wodehouse who is also commonly referred to as the best comic writer in the English language. With the approval of the Wodehouse estate, the writer Sebastian Faulks has attempted to bring to life these two wonderful creatures.

In this book, Bertie falls in love with a young lass Georgina Meadowes, a girl who, as decided by the current ill-fated fortunes of her uncle, is betrothed to another. Bertie Wooster’s dear friend is in the dire need of his help, reason: he is in love with a girl but is unable to woo her family. Once Bertie decides to help his friend while also pursuing his love interest at the same time, the situation turns hilarious with somehow Jeeves forced by circumstances to become one Lord Etringham and Bertie his manservant Wilberforce. The result is a hilarious combination of mishaps and misunderstandings which give the readers the most fun time.

The best thing about “Jeeves and the Wedding Bells” is its characters – Jeeves and Bertie Wooster. They are simply hilarious and quite charming at the same time. My personal favourite among the two is the gentleman Jeeves, the latter’s butler who is just the best butler I have ever come across. The plot was also very nicely done. The attempt which the author makes to bring to life the two characters has been very successful for the author has done a beautiful job of it. Full of humour and wit, the book is an amazing read for all Wodehouse lovers.

I didn’t really find any.

Go for it. A must read for all Wodehouse lovers.