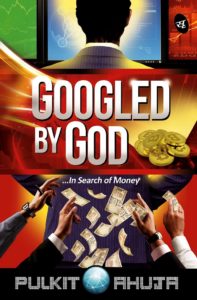 Financial thrillers are increasingly gaining acceptance in the Indian literary markets and why not? Given the kick they provide and the way they are written, they are sure to make heads turn and lure readers by the thousands. Googled by God is a story of a guy Sahil Kashyap who is torn between two deadly wishes – that to avenge the death of his beloved brother Rahul or to take revenge for the betrayal his father faced almost three decades ago. Rahul was allegedly murdered by the man at the helm of one of India’s most rich and successful firms, JONAS Partners. The reason – he had invented a technology which if released in the market would create havoc for the fifty million dollar investment that the firm had just made into buying a 30% in a start-up company.

While Rahul was the victim of greed, his dad too had been betrayed for money. In 1986, when his dad Vijay was still studying at IIM, he along with a Russian student invented a machine which could scientifically and 100% accurately predict the stock market movements and thus can churn out money incessantly. The invention was a joint effort but Paul, the Russian student betrayed Sahil’s dad and took all his hard work and flew out of India overnight while making sure that Vijay was sentenced to a seven year term.

So how will Sahil destroy the two of them? Will he be able to face the two financial giants all by himself? Or will he too land up in jail like his father or worse in heaven like his brother? How will he plan the downfall of the two of his biggest enemies? Know this and much more in this exciting new book today.

Gauging by the writing style and the background of the author, the author has immense knowledge of both the financial services and the information technology industry and the author has put his knowledge of both these worlds to extremely good use. Googled By God is just unstoppable. The reader is amused, alarmed, confused, excited, thrilled, angered and what not for that is the kind of emotions that the author manages to invoke in the reader throughout the course of the book.

The plot has that perfect balance of simplicity and complexity which makes the book interesting and yet not too confusing. The simplicity helps easy comprehension and makes the book a breezy read while the complexity is not too much so as to confuse the readers with number of subplots, characters etc.  The way the book starts is just mind blowing. It suggests something sinister and sinister is what you get in the coming pages. The entire read feels like a roller coaster ride and is sure to make your heads turn.

The only qualms I have with the book is with the characters. There was hardly any depth to the characters and most of them appeared too shallow for my taste. Only the character of Akram had a depth about him. However, I do understand that with only 168 pages in hand, it must have been a heavy task putting the characters and the plot in place and doing such an awesome job overall. The cover also, I believe could have been a little more attractive to appeal to wider reader base.

But that being said, the book needless to state again, was an exemplary read and I am eagerly awaiting the author’s next. I thus rate the Googled By God four out of five stars and would recommend it to all my readers.

Book Review Googled By God Pulkit Ahuja
by Sankalpita
Leave a Comment
Prev: After The Crash | Michel Bussi | Book Review
Next: The Girl On The Train | Paula Hawkins | Book Review