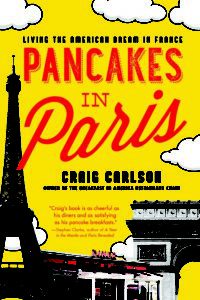 Pancakes in Paris: Living the American Dream in France. The subtitle says it all. This book is every man’s ticket to making the American Dream work in Paris. Personally, I feel the book couldn’t have had a better title than this. So before you start wondering what I am ranting about, let me first tell you a little bit about this book.

“Pancakes in Paris” is the memoir of an American called Craig Carlson who was raised in a family of humble means in Connecticut. His was a torn family and Mom and Dad didn’t bother much about their three children (Craig included). In a childhood frequently marred by constant struggle for love and money, Craig first discovered and fell in love with Paris when he went to France on a student exchange program.

It was not a love at first sight but a love which blooms gradually and with time. Due to the limited time, Craig could not explore France much but what he didn’t know then was the fact that France will lure him back again. His affair with France was anything but over. Fast forward a couple of years of his struggle as a moviemaker in Hollywood and he was back again in Paris. This time to open an American-styled diner in Paris.

This book is mostly about his travails and experiences with respect to opening and running a successful American-styled diner in Paris. The book is easy to the mind and with an effortless charm, Craig Carlson takes you on a roller coaster ride of erroneous misadventures and pleasurable encounters. He writes with candidness and humour and makes the read a really easy one for the reader. It also has just the right number of pages to cover everything and yet keep you hooked. The storytelling way of writing fetches the book top marks in entertainment quotient too.

Apart from the writing what also appealed to me was the vast expanse of knowledge which the book seems to impart to its naïve readers. I personally learned a lot about France, its cumbersome and prehistoric labour laws, restaurant business etc. That to me was the biggest gain I have had from reading this book. Like a cherry on top of the cake, I also liked the title and cover page a lot. In fact, that was what drew me to request the title for a review on NetGalley.

So, my recommendation will be to definitely go for “Pancakes in Paris”. I am sure all my readers will come to enjoy it as much as I did. That being said, I end this review by rating this book four out of five stars.