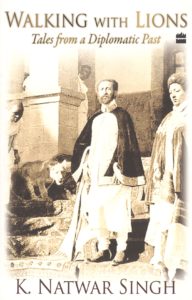 I have always been a fan of memoirs and I prefer the ones written by politicians. K. Natwar Singh has been a diplomat, a politician and an author. He has served as India’s ambassador to many countries, has been an MP and has also served as the minister for external affairs. Though I am not a big of the man, the reason I picked this book up is because it a cocktail of Natwar Singh’s experience with other world leaders, politicians, diplomats, actors, artists, etc. It is only rarely that we get to read about many great people in a single book and that is what this book offers.

In Walking with Lions, Natwar Singh has written about his meetings, his dialogues and experiences with many leaders like Pandit Nehru, Indira Gandhi, Morarji Desai, Lal Bahadur Shastri, Nelson Mandela, Lord Mountbatten, Margaret Thatcher, Dalai Lama, Zakir Husain, Dev Anand and many more – a total of 50 to be precise. This memoir is neither dull nor too political. It is filled with humour, wits, wise-cracks and many unknown trivia which you haven’t read anywhere. Though his devotion to Mrs. IG and Mr. RG is very obvious in the book, the rest of the book is a fun ride.

There are many funny events scattered in Walking with Lions like Morarji Desai’s dietary preferences, the bomb scare in Indira Gandhi’s plane, Zia-ul-Haq’s friend Paul, Mountbatten’s obsession with his portrait, Indira’s meeting with Margaret Thatcher, etc. The book also brings out the relations our ex-PMs had with other world leaders like Fidel Castro, Robert Mugabe, King Sihanouk of Cambodia, Zia-ul-Haq, General Nguyen Giap of Vietnam, Dr. Banda of Malawi, Haile Selassie of Ethiopia, etc. There are many such incidents – fun & serious, friendly & political, light & grave – and they all have one thing in common – they are fun to read.

Besides politicians, heads of states, dictators and kings, Natwar Singh has also written about his meeting with actors and artists like Dev Anand, Zakir Hussain, Sunil Dutt, Nargis Dutt, etc. and spiritual leaders like The Dalai Lama and Chandraswami. I particularly liked the incident where the controversial godman Chandraswami meets Margaret Thatcher, with Natwar Singh’s help, and predicts her future. From there on, he keeps tabs on Natwar’s whereabouts and keeps helping him in his own way.

The book is roughly 200 odd pages long and includes many photographs too. It is a definite fun read and can be finished in a single reading session. I would suggest you to grab Walking with Lions on a weekend or on a rainy day when you have nothing else to do. I’m sure it won’t disappoint you.