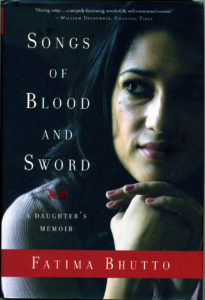 Scholastic textbooks on history give a vivid account of life in the Indian subcontinent, weaving through different time periods. As students advance in their school years, we reach the Late Modern – Mughal India – and Post-Colonial period, with the information being presented in increasing detail. However, at this juncture, details on Pakistan or any of India’s neighbors for that matter dissipates. Just as with political partition, academia no longer considers Pakistan relevant, and it is cropped out of our textbooks.

Songs of Blood and Sword, is that chapter in history which was never considered important enough to be included. It is a pellucid account of the political landscape of Pakistan, and most importantly is done so in perspective of the life of one of its greatest Statesmen – Zulfikar Ali Bhutto (The Bhuttos to Pakistan are what the Nehru-Gandhis are to Indian political history); the author is his granddaughter.

Not getting into the content of the book, what deserves explicit mention is the way in which this personal memoir was pieced together. Email correspondence, hand written letters, familial archives, meeting with her father’s college friends and faculty, writing this novel has been no easy task. Consider the fact that her father, Murtaza Ali Bhutto, was assassinated when she was only fourteen years of age. Logistical difficulties aside, the trauma of having to relive those moments – and more such, as you will find out – and writing about it is humbling, and at once commendable.

The book is, in part, also an epic saga of adventure in that many years are spent in exile and international activism leading them to far flung places like Kabul, Damascus, Tripoli, Athens and London to meet with the executives and Statesmen of those countries. The displaced family is many times received as official guests of the President, and is treated thusly. (For his return to Pakistan, as an elected representative, President Hafiz Assad of Syria, arranged for Murtaza’s travel in his personal aircraft and negotiated with the governments of those countries over whose airspace it would fly)

Central to all the events which unfurl publicly, is an internal anxiety in the author’s own family which becomes reflective of the external. Warring factions within a family is nothing unique, but the extent to which grudges are held, and the lengths to which people go to seek revenge, is unnerving. The insatiate thirst for power and the coldness with which some lung for it, is more telling of a person than any media account can/or will show – a good many people are uncloaked.

Summing up – A rebellious slap to media censorship and state oppression, Songs of Blood and Sword is a book that slices through mainstream media rhetoric and gives a first-hand and credible account of the political upheavals and conspiracies of one of India’s most important neighbors. It is an important literature for students of Indian political history for the parallels it helps draw to changing scenarios in India. Lastly, one mustn’t forget that it is a memoir, not an academic textbook, and is written with indulgence. Perhaps for this reason, Songs of Blood and Sword will be more widely read and better appreciated, as it rightly deserves to be. An absolute essential on my shelf!