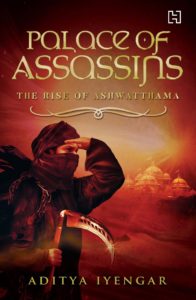 Now that the mythological fiction genre has picked up momentum from its humble beginnings, the trend shows no signs of slowing. It often gets confusing for a reader to differentiate a good book from a mediocre one and that’s where I come in. I got a chance to read and review “Palace of Assassins” by Aditya Iyengar as part of the Flipkart Book Review Program, and since I am an ardent lover of mythology, I readily agreed for a review copy.

Palace of Assassins: The Rise of Ashwatthama is the story of Ashwatthama told after the conclusion of the great war of Kurukshetra which resulted in the Pandavas winning over the Kauravas. Ashwatthama wakes up one day, after the war, and remembers to his horror the fateful night when he was inflicted with the immortal curse by Krishna. To further aggravate his suffering, he has also been given the Leper’s curse which immediately makes him unwanted to anyone near him.

Before long, Ashwatthama realizes there is a gemstone which has the power to cure his leprosy and restore his mortality. Knowing this, he starts on a quest to find the stone, set things straight and also seek revenge for the wrongs that have been done unto him. But all this is not as easy as it seems. He will have to fight unknown enemies, learn to live with his inner demons, get used to being shunned and will even have to sacrifice the love of his life. To know what happens next to Ashwatthama, I suggest you read this exciting novel yourself.

I liked the plot of the book and the writing style of the author. The plot is one-dimensional and focuses singularly on the journey of Ashwatthama. This makes the book a much breezy and uncomplicated read. The characters of this book are an okay bunch. I liked the way Ashwatthama has neither been portrayed as a hero nor as a villain. He looks like a man on a self-discovery mission. There were instances when I thought he should have been showcased as a stronger character (more warrior like) but I think the author might have something else in his mind. Maybe he has planned Ashwatthama’s story in a different way.

“Palace of Assassins” reads like a thriller, there is always an element of intrigue and the reader is forced to turn pages at a fast pace. And finally, the book ends on an even grander note. There is a lot of promise in Aditya’s writing. He writes with finesse and maintains the pace of the story throughout the book. But the best part of the book is its end. It is sensational, electrifying and totally awesome. Multiple revelations grace the end and that is what makes this book such a winner.

Though there is no mention that the book is a part of any series, the end tells you that it is not the case. There will definitely be a second or even third part and I simply cannot wait to find out what happens next in Ashwatthama’s story. Needless to state, “Palace of Assassins” deserves four and a half out of five stars in the entertainment quotient and I recommend it to everyone who is a fan of mythological fiction.