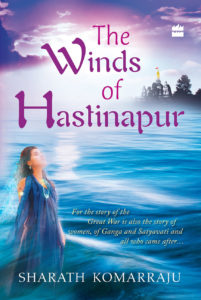 With more than 74,000 verses and about 1.8 million words, Mahabharata is the longest epic in the world.

It has been widely translated, simplified, retold and fictionalised over the centuries.

But most of them do not give you the total picture of the epic for two simple reasons – first, the womenfolk are largely ignored and second, most of them start the narration with the birth of Pandavas and Kauravas, while the actual story has its beginnings at a much earlier time.

Chaturvedi Badrinath’s “The Women of the Mahabharata”, Kavita Kane’s “Karna’s Wife” and Chitra Banerjee’s “The Palace of Illusions” attempted to bring the focus on the women of Mahabharata.

Similarly, there are complete translated volumes of Mahabharata which give us the entire story, but these do not serve everybody’s tastes.

Sharath Komarraju, through his recent novel The Winds of Hastinapur, has attempted to combine these two; it tells the story from the very beginning and has a major emphasis on the women characters of Mahabharata.

The Winds of Hastinapur begins where the Mahabharata ends – the death of Pandavas while ascending the Meru hill. There are two worlds – Meru, inhabited by the divine beings and Earth, inhabited by humans.

When Sage Vasishta’s holy cow, Nandini, is stolen by the Gods of Elements, they are cursed with a life on Earth.

Ganga, a river maiden is destined to help them to fulfil their curse. She descends to earth and marries King Shantanu of Hastinapur. After the death of seven sons, she gives birth to Devavrata, who grows to become Bhishma, a legendary warrior and administrator.

Being the eldest son, Devavrata is expected to ascend the throne of Hastinapur, but the Gods have different designs for him, and he not only forgoes the throne but also takes a vow of celibacy.

Shantanu has two other sons from his second wife Satyavati – Chitrangada and Vichitraveerya. When Shantanu dies, Chitangada replaces him as the King but he dies soon after in a hunting accident, and Vichitraveerya becomes the King.

When Vichitraveerya too dies heirless, his wives are expected to follow the age-old tradition of Niyoga – having sons outside of marriage – with Vyasa, the purported author of Mahabharata.

The story is narrated in part by Ganga, and in part by Satyavati. Ganga is torn between her duty as a mother and her duty as a river maiden. Her desperation when she is forced to part from her son is beautifully brought out and makes you feel for her.

Satyavati, a fisherwoman, has lived her entire childhood in poverty and oblivion, and when opportunity knocks at her door she grabs it with both hands. Her sole aim in life – to see her sons become the Kings – makes her do unimaginable things.

Her desperation increases with the increasing influence of Devavrata and the diminishing power of her own lineage, and Sharath has narrated this remarkably well.

The climax is perfect and has created a solid footing for the sequel. Though the central characters of The Winds of Hastinapur are Ganga and Satyavati, Devavrata is the character I admired the most.

He is a character who will likely appear in all the sequels, and Sharath has pulled off a perfect character build-up.

Among the bunch of mythological fiction books, the story of The Winds of Hastinapur stands out and it shouldn’t be missed.