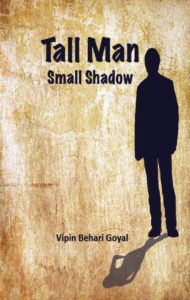 “Everything that we see is a shadow cast by that which we do not see” – Martin Luther King Jr.

Shadows are, what one may say, the most miserable creatures of the world; bound by shackles of their owner and at the existential mercy of the light which creates them as per its whims, they are the most forsaken beings.  But then, do we really know the truth, do we see the complete picture or are we merely blinded by the limitations of our ignorant selves. It is this apparent inconsequential part of our existence, that Tall Man Small Shadow explores in detail and which results in this short and sweet story (I would rather call it a novella) of a man matured, a girl blossomed, a lady fulfilled, and an old couple contented.

Anupam is an old man happily living with his wife and daughter when he notices the new man in his neighborhood. Salil, a loner who has nothing but books for his company, is a man matured beyond his years. Aalya the daughter of the jolly hearted old man is a girl who knows what she wants, and how to get it. Currently pursuing her doctorate degree under her guide Seema, she is looking forward to making her mark in the world. Seema, the lonesome wife of Paul, the artist, is anything but content in her marriage. With an indifferent and absent husband, she has no one to mind her emotional and physical needs.

The characters interact, involve and keep moving on their erratic haphazard paths but ultimately settle for a less chaotic version of their life, intermingled with the lives of others around them in complete harmony. How do they reach this harmony, this state of bliss? Is it mere coincidence or the ingenious of a cunning ploy? Well, to Sulekha it appears like the payoffs of her craft and prowess. At  a time when she is complacently celebrating the success of her conniving, it is humbly disclosed by her husband (at the end of five years and also at the end of the book) that happy endings in their story have more do with co-incidence than the wife’s perfectly executed planning.

Tall Man Small Shadow, all of 152 pages, is short and can easily be done with in a single sitting (I practically read half of it while in a traffic jam on my way home from office). Leaving the co-incidence and shadow philosophy aside, the book has not much to offer in terms of a strong plot and strong characters. The editing mistakes could have been avoided and the burden of repetitive philosophy shunned. Another thing which may blight your reading pleasure is the frequent change of voices. One instance you are reading Salil’s version and the next Aalya’s and what surprised me most is the fact that this happens in all chapters. With a little more effort and time dedicated to it, Tall Man Small Shadowwould have been an outstanding read for the story is both intriguing and crisp. All in all, considering the fact that it rescued me from the awful traffic jam, I would rate Tall Man Small Shadow it a three out five stars.