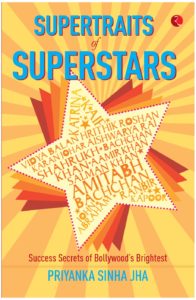 If I talk about the factors and forces which most efficiently bind India together, and which more or less can be referred to as an invisible & intangible cultural force, Bollywood is sure to find a mention, second only to cricket which is often hailed as a religion in itself. Bollywood is that cultural phenomenon which not only entertains us but also influences us, our choices, our fashion sense and many other decisions at the subconscious level. Thus, when it comes to inspiration, which better way to look at, than the omnipresent and most effervescent Bollywood. Priyanka Sinha Jha’s Supertraits of Superstars is based on the same theme and thus enunciates qualities that we can imbibe from various Bollywood celebrities. These qualities or ‘supertraits’ (as they are called in the book) are indeed quite impressive, and if imbibed, can surely lead one to boundless heights.

The book is divided into several chapters, each of which covers an individual celebrity or superstar and the qualities which have to help them succeed in the ever competitive and cutthroat world of Bollywood. Each chapter starts with something about the star and moves on to talk about the various qualities which are his/her signature traits. The chapters mostly mention multiple traits, sometimes highlighting the most important ones in the starting, before moving on to describing the next. Interlaced with generous doses of examples, (few personal, where the author quotes her own interactions with the celebrities in question and a few others where she has picked up incidents from various public sources) the book makes for an exciting read.

Amitabh Bachchan, Shahrukh Khan, Salman Khan, Vidya Balan, Aamir Khan, Aishwarya Rai Bachchan, John Abraham, Karan Johar and Hrithik Roshan are among the few celebrities which the book speaks so highly about. Especially inspiring are the chapters on Amitabh Bachchan, Shahrukh Khan and Karan Johar. These celebs, being my personal favourites, were quite interesting to read about. How Amitabh Bachchan is most likely to arrive three hours early than even 1 minute late, a practice which he has most ardently applied in his everyday life was indeed a thought-provoking one to read about. Shahrukh Khan’s humility and passion were also a treat to read about. I liked the parts about Vidya Balan and Aishwarya Rai Bachchan too.

Moving to the positives and negatives of the book, I liked the book in the way it is written in an easy to flow language. I also liked the content and the celebrities on whom it was written. The peppy and candid feel of the book was supplemented by the humorous quotient of the cartoons given at the start of each chapter. The only qualm I have about the book is regarding the research that went into it. I wish that the book contained some more references and examples. But nevertheless, I liked the book and would recommend it as a light read to all my readers.

So, how did you like this review? Please let me know your thoughts by dropping in a few lines below.