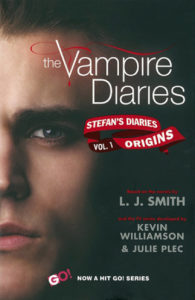 Stefan’s Diaries Origins is the first part of Stefan’s Diaries, the book where Stefan’s journey begins. This book is a must read for anybody who follows the American Channel CW’s best show “The Vampire Diaries” for it takes you through the complete and unabridged history of the Salvatore brothers and how they came to exist.

But, before the non-Vampire Diaries followers turn away, I want to tell you that I am writing this review for those who have basically no idea about the show and even those who have never ever heard the name of “The Vampire Diaries” series.  Now, I know you guys don’t follow vampires, and you are just sick of these girly and chick-lit vampire themed books, but I must tell you that this book and this series is not one of them. At each turn of the page you will find a new twist, a new thrill; for this is a story of vampires which feeds on guilt, jealousy, romance, lust, revenge, and survival instinct. So, having hope that I have adequately convinced you of giving this book a shot, I must proceed with the review now.

Stefan’s Diaries Origins is written as the journal of Stefan Salvatore, an Italian whose father came and settled in Mystic Falls (a very small town in the state of Virginia, United States). Stefan Salvatore lives with his brother Damon Salvatore and father Giuseppe Salvatore at their huge estate known as the Veritas. It is the year 1864, and the civil war is brewing in the United States, the state of Virginia is supporting the Confederate army and Stefan’s brother Damon is a Confederate soldier. Though the state is in middle of a difficult war, the town has its own evil battles to fight. There is a talk that there are a lot of killings happening in the town but not all can be attributed to the soldier scuffles and people are scared that these killings are devils work.

Stefan has also heard about all these claims but with the burden of being the future manager of his father’s estate and his impending marriage with his betrothed Rosalyn, he hasn’t given a much thought to town people’s talk.  Stefan is busy contemplating his ill-suited marriage to Rosalyn, knowing well that he would never be able to truly love her. Between his own desire and his father’s will, he chooses to abide by his father’s resolve and is busy playing the role of a doting soon to be husband and a dutiful would be son-in-law to the Cartwrights. But just as he is readying himself for an insipid and regular life with Rosalyn, everything is about to change in a way Stefan would have never imagined before. With the arrival of Katherine Pierce, a girl orphaned in the war-torn town of Atlanta, Stefan’s life would take a dangerous and immortal turn, one which he will always regret and what will follow is a saga filled with hunger, desire, revenge, fear and outrageous courage.

L.J Smith as an author has the wonderful ability to so effortlessly link history and fiction. The setting of Stefan’s Diaries Origins during the American Civil War creates a mysterious aura around the events. He writes remarkably well, creating mystery and even illusion sometimes, in the minds of the reader, before finally revealing the truth. The characters are all well-defined, having a sense of purpose and not merely there to fill pages. There are not many sub-plots, at least not in the first book and therefore the focus of the story is never lost. The author also successfully links Stefan’s Italian heritage with his writing and thus a quote or two in Latin is found every now and then, giving the book a rich context. Overall, L.J. Smith does a brilliant job of narrating Stefan’s tale in the first part and I am sure the later book will also be equally thrilling and exciting read.

I am looking forward to reading the next one pretty soon.