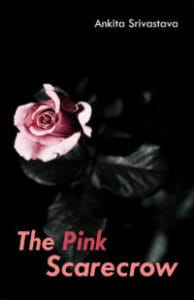 With her impressive personality and an equally impressive resume, the army officer and a beauty pageant winner, Ankita Srivastava has yet again turned heads with her debut novel, The Pink Scarecrow. The book is set in an army backdrop for the most part of it and has quite a good story to claim. The story revolves around Lieutenant Colonel Vishesh and his past and present.

The story unfolds as Vishesh is being commanded by his CO to attend the New Year eve’s party which he has not the slight interest and intention of attending, but has to ultimately agree to because of his CO’s orders. With his wife and children out-of-station, he is all alone in the party and intents upon leaving as soon as possible. However much to his surprise, his interest is held by a former beauty queen – who has come to grace the celebrations with her elegant personality.

But where Vishesh had earlier intended to leave the party ASAP, he is now finding himself glued to it because of the beauty queen. Before long, Vishesh is under the effect of alcohol and soon starts reminiscing about his past and especially, about a girl from his past. He thinks of Garvita who was a shy and sweet girl whom Vishesh had met almost 19 years back. She was the weirdest girl he had ever seen and he had therefore instantly named her – The Pink Scarecrow. The story begins unfolding as Vishesh starts remembering the incidents of his past (Garvita) with most vivid details. The rest of the book is all about his past and the way it connects to the present day.

The author has a different style of writing and in many places, she has experimented with her style. The character of Vishesh has an interesting depth to it but the best part of the story is its pace. The story is not too rushy and has a gradual pace of its own. I think it is something good, and something which a plot like this demands. The army backdrop is interesting and adds to the further charm of the book. Though it is a decent read, there are a few things amiss in The Pink Scarecrow.

First and most disappointing is the frequent change of voices (POVs) without any change of situation or chapter. In one paragraph, I am reading Garvita narrating her nervousness and in another (without a hint and quite abruptly) I find Vishesh describing his situations. It happens very frequently in the book and spoils the reading pleasure. Also what I found disappointing was the too detailed and often repetitive description of the party, the beauty queen, her beauty. It was very boring and recurring. All in all, The Pink Scarecrow is a decent one-time read for those who enjoy a slow and gradual paced story. But since this is her first book, I sincerely believe that the author’s writing style will mature over time and I wish her all the very best for her future writing endeavours.

Ankita Srivastava Book Review The Pink Scarecrow
by Sankalpita
Leave a Comment
Prev: There May be an Asterisk Involved | Vedashree Khambete | Book Review
Next: The Bankster | Ravi Subramanian | Book Review