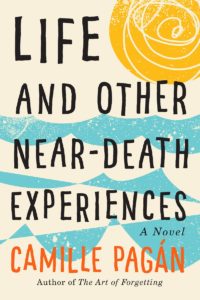 “I liked this parallel universe I found myself in. It was a place in which I was able to ignore trivial matters such as work, bills, and my gay husband, and instead sun myself with abandon, eat and sleep at will, and catch up on the carnal pleasures I’d missed during the first thirty-four years of my life.” ― Camille Pagan, Life and Other Near-Death Experiences

I was in a mood for a light romance-cum-chick lit when I stumbled upon the book, Life and Other Near-Death Experiences in the kindle unlimited section. The blurb and the cover looked neat and I soon ended up downloading the book. I was fascinated by what the blurb promised – a mid-life crisis, a new hope, and a romantic adventure under the bright Caribbean sun.

The story as it goes

Life and Other Near-Death Experiences tells us the story of Libby who until now, was living a pretty normal life with her husband Tom when one day her world is shattered. She comes to know of two facts that will forever change the course of her life – (1) she is suffering from a supposedly incurable form of cancer, and (2) her husband of nearly two decades is a gay.

Shell-shocked she flees from Chicago and takes refuge in a desolate Carribean island where the promise of sun-kissed sands and a hot guy brings her some respite. Enjoying the vacation of her life, deep down she is still coming to terms with the brevity of it. Thrown into the equation is her caring twin brother, Paul who is Libby’s best friend too.

Where will Libby’s life take her? How long will she live? What about the hot pilot Shiloh? How long before it all ends?

The Plot and Writing Style

The plot of the book is pretty straightforward. There aren’t any subplots to speak of but the main plot itself is good enough to maintain the reader’s interest. The most striking part of the author’s writing style is that she is able to write a light-hearted, even humorous book on such a serious issue as cancer. Libby has a lot of problems to deal with but that doesn’t stop her from making the most of her short life. The author is able to bring out serious emotions, passionate romance, candid humor and heart-breaking pain in all but one novel.

Libby comes across as a case of confused imagination. On one hand, she is this humble and meek being, while on the other she never fails to show her aggressive streak. She is also someone who is unable to think properly and remain calm. For me, she wasn’t a really interesting and inspiring character. On the other hand, I actually felt myself falling for Shiloh; the hot pilot who almost killed Libby and ended up falling in love with her. Paul, Libby’s twin brother was another character who was charismatic, powerful and always in control.

Long before the book ended, it was quite clear where the story was heading and therefore it cannot be said that the climax was unpredictable. It, however, gave a befitting end to the story. I am pretty sure I wouldn’t have liked the story to end any other way.

What did I not enjoy?

Libby’s character especially when she couldn’t make her mind about a lot of issues was a bit irritating. Her stubbornness was also a bit off-putting.

What did I love?

I liked the lovely setting of the book. A major part of the story takes place in Vieques in Puerto Rico; a place where the sun and booze never set. I also enjoyed the emotional connection between the twins. Their bond was a special one and worth relishing. Further, the passionate and emotional descriptions of Libby’s experience of her mother’s cancer was something which never failed to bring about a tear or two.

Overall, Life and Other Near-Death Experiences is a quick and easy read which tells us a story of loss, struggle, love, and hope. It will be a good read for somebody who loves light (but not too cheesy) romances.  It will also appeal to people who are looking for a mildly emotional read.

Can’t wait to read it? Buy your copy of Life and Other Near-Death Experiences using the link below.