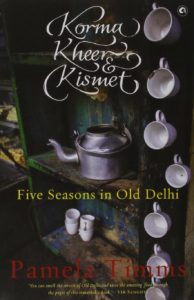 Old Delhi, or Purani Dilli as it is usually called by the residents of India’s capital city, is the walled city within the current Delhi.

It was founded by Mughal Emperor Shahjahan in 1639 and was then called Shahjahanabad.

Home to the famous Lal Qila, the ever-buzzing Chandni Chowk, the oldest cantonment Daryaganj and the famous wholesale markets of Chawri Bazaar and Khari Baoli, it is now known as the cultural and gastronomical heart of Delhi.

Pamela in her quest for unlocking the secret to Old Delhi’s culinary mystery travels far and wide, in dusty lanes and sultry by-lanes, talking to strangers and even the most unfriendly of the men who inhabit the streets of Purani Dilli.

She seeks recipes from the most unapproachable of the lot and succeeds in some and loses in some.

Korma, Kheer & Kismet is the ultimate “go-to” guide for all food lovers and enthusiasts especially those who live nearby Delhi and can always go and experience the gastronomical orgasm which the author experiences with every new discovery.

What makes the book click is the fact that it is neither a “compilation of food blog entries” nor a “mere cookbook”.

It is a compilation of various food experiences, street food discoveries, clandestine recipes sprinkled with anecdotes, histories, stories and memories of those who make it and those who have experienced it.

I will surely be surprised if there is a more passionate account of Old Delhi Food.

The author in between her food adventures also writes about herself, her Scottish home, Scottish food and her early adventures with food as well (especially French food and particularly the dreadful snails which were quite frequently cooked in her acquaintance’s place).

She also explains her journey from the ever cold Scotland to the ever scorched Delhi and how she had her own share of pitfalls when adapting to the chaos-ness of Delhi.

But all the hardships and the adversities do not deter her passion for finding out the best of Old Delhi’s food culture.

A must-read for all food enthusiasts and food seekers, I recommend Korma, Kheer & Kismet to one and all and would rate it four out of five stars for the sheer passion which has gone into its making.