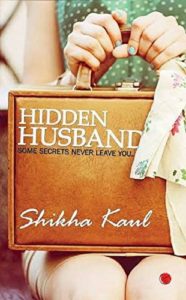 You must probably be wondering the reason behind this extremely intriguing and rather weird title, but trust me, once you read Hidden Husband, you will know that the title is as apt to the story as it can possibly be. The story is of a young professional Aisha who works in an MNC in Gurgaon and stays in the same city with her parents. Her work in HR department of the company involves her interacting with many new people and it is here that she meets the charming Raghav. With his perfect looks and seamless persona, Aisha instantly falls in love with him. But before they wish to take their relationship further, they will have to face the hard realities which affect their relationship.

Raghav is a Bihari and Aisha is a Punjabi. But as if that is not enough, there are multiple issues with Raghav’s family which almost makes it impossible for them to be together. In such a scenario, what will the couple do? Will their love for each other be able to overcome the challenges which face them? And what about Sameer, the guy who has loved Aisha ever since he first set his eyes on her in school? Will he find a place in Aisha’s heart or will his dreams end up never being fulfilled? Who will be the hidden husband and who will be the unhidden one? To know this and much more, read this interesting piece of fictional work today!

I liked the storyline; at the onset I had imagined it to be a regular and simple story but I was rather surprised at the way the story unfolded with new twists and turns pages after pages, they were really unexpected and caught me unaware at times. I also liked the characters – Aisha, Piyali, Raghav and Sameer. All of them had an important role to play in the story and all of them had a certain depth about them which made me love them, hate them and even empathize with them. I really admired Piyali for the patience she had shown all throughout the book and I would really be blessed if I had a friend like her!

The beginning and end were the best part. Hidden Husband started on an interesting note and continued to be so in the following chapters, slowing a little bit in the middle and again picking up in the end. The end scene was fresh and welcoming leaving the reader mulling over the entire story once again.

The only issue I had with the writing style finds its roots in the fact that I believe the book could have been a bit more condensed than it was as there were certain chapters which seemed a little lengthy to me. But having said, the book overall did really well for a decent read and I therefore rate Hidden Husband three and a half out of five stars and will recommend it to all my fiction loving readers.

Book Review Hidden Husband Shikha Kaul
by Sankalpita
Leave a Comment
Prev: The Girl On The Train | Paula Hawkins | Book Review
Next: Maybe This or Maybe That | Abhaidev | Book Review