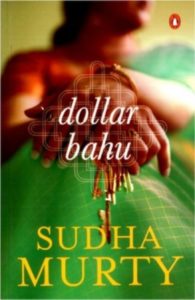 Sudha Murty is the famous chairperson of the Infosys Foundation and the wise founder of the Indian software giant Infosys. In addition to pursuing her professional career in information technology, she has had various interests like social work, reading, writing and even acting!

Dollar Bahu, one among the seventeen other books authored by her, was first written in Kannada as Dollar Sose (Sose being the Kannada word for daughter-in-law) and later translated into English. It became so popular that ultimately it was aired as a television series in 2001 by the Indian television giant Zee TV.

Dollar Bahu is the story of the Gauramma, her Dollar Bahu Jamuna and her other simpleton bahu (bahu being daughter-in-law in Hindi) Vinuta.

Gauramma is a greedy little mother of three children – Chandru, Girish and Surabhi, living in a small house in Bangalore with her husband Shamanna. Chandru the eldest of her son is settled in America and is married to Jamuna, only daughter of rich parents. Girish the second, is a bank clerk and married to Vinuta, a sweet young woman who works hard day and night and never fails to carry out her household duties and her duties to her mother-in-law.

But between Jamuna’s Dollars and Vinuta’s selfless devotion, Gauramma always finds her favour with the Dollar and ignore what is truly priceless – Vinuta’s devotion and selfless love.

The story progresses just like a typical Indian soap opera and Vinuta continues to bear all the brunt of the endless comparisons between her and Dollar Bahu. She starts wilting and losing her health and mind. Soon Gauramma gets a chance to visit her son Chandru and Dollar Bahu in the American house and stays with them for a long time. But before it’s too late and before Vinuta is lost forever, she soon realizes that all that glitters is not gold and that Dollars, in the end, can’t buy everything.

The book ends on a “truth always wins” note and is likeable to a fable or a moral story which as a child we all may have read as schoolchildren.

The characters are what drives this book apart and add spice and colour to the otherwise simpleton plot. The typical Kannada household and theme helps the reader reminisce about the good old Malgudi Days.

All of 150 pages, this book provides a short and sweet read and can be done away in one go. The language and theme kept simple also relaxes the reader and lets him relish the beauty of Sudha Murty’s writing.

Word of Caution: If you are looking for some high voltage drama (serious vamp style), this is not your book. This is just a simple plot and a simple story delivered beautifully by the famous Sudha Murty.

Book Review Dollar Bahu Sudha Murty
by Sankalpita
Leave a Comment
Prev: Valley of Nightmares | Jane Godman | Book Review
Next: There Was No One At The Bus Stop | Sirshendu Mukhopadhyay | Book Review