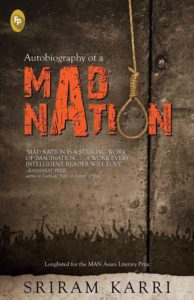 Sriram Karri, a journalist by profession first gained limelight when his non-fiction debut book “The Spiritual Supermarket” was long-listed for the Vodafone Crossword Book Award.

But his journey as an author did not end there.

In February 2015 he came up with his second offering “Autobiography of a Mad Nation”, a fiction which in a very subtle way hints at the constant degradation of our country at the hands of the perilous nexus of the politicians, businesspersons and other such centres of power.

The book starts with a simple yet complicated murder of a mad boy Iqbal at the hands of a seemingly motiveless person Vikrant Vaidya.

The murder gets further twisted when Vikrant Vaidya writes a letter to the President of India claiming innocence and urging him to have the case reopened.

The President, moved by the words of the letter calls upon his most trusted aide Vidyasagar and assigns this seemingly impossible task to his able hands. But little does Vidyasagar knows about the extent to which this conspiracy runs.

So how will he unveil the truth? How will he rescue the innocent Vikrant? Will he ever be able to get to the core of the conspiracy? To know this and much more do read this book today!

The best part about the book was its plot and subplots and the way they were all knitted together in the end. The characters too were very intriguing and left me wanting for more.

The theme of the book was indeed thought-provoking and the way the underlying satire on the current state of the country was portrayed; though challenging, was very well executed.

The book does address some serious issues which are currently plaguing our beloved country, with some of the issue being sensitive enough to raise brows and bound to raise the red flag on the radar of the so-called extremists.

With this book, the author comes across as an unconventional writer, easily distinguishable among the plethora of authors who roam the Indian literary circles these days.

In the end, “Autobiography of a Mad Nation” was a pleasant read and I would definitely recommend it to all serious readers who just like me are in the desperate need of some serious break from the regular college-office-romance type novels.