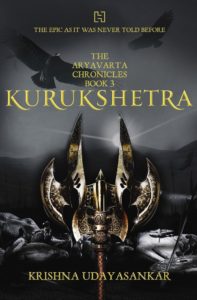 India is a country filled with storytellers and mythological tales that are at once fascinating and revealing.

The people in mythology are of such strong characters that one is but left to wonder how they would fare in modern society.

Their moralities, their beliefs, their understanding of Dharma would severely be tested and it would have been fantastic to see how they would make decisions in present-day society’s rules.

The Mahabharata was one such epic that had a rich variety of characters, a tale that one cannot put down even to this day.

Thanks to Krishna Udayshankar’s trilogy “The Aryavarta Chronicles”, we can imagine how it would be like for kings and commoners of that time to have to work within the constraints of today’s world.

The trilogy started with “Govinda”, in which the story of Govinda Shauri was narrated, followed by “Kaurava” where the focus was more on Syoddhan and Yudhistir.

The final book in the epic trilogy Kurukshetra tells the tale of the political and human manipulations in the build-up to the great war. In fact, as one would expect, the Kurukshetra war itself takes a major portion of the book, and it is described in great detail.

While the story outline is itself predictable for anyone who has read the Mahabharata, where the author scores points once again are in the reinterpretation of the epic.

As has been the norm throughout the trilogy, there are no good and bad people, just different shades of grey.

Krishna Udayshankar also paints a detailed picture of the war itself, and how she manages to get past the barrier of imagining the various astras to a modern interpretation is also wonderful to read.

All the characters in the story are given equal importance, and more importantly, the author does not try to take a stand as to who is right and who is wrong.

Whether it is Syoddhan or Dharma, both have been shown to have positive traits and flaws as well. Abhimanyu is well represented in the story, as well as Ghatotkacha and the Rakshasas.

The story behind each story is fascinating in itself and does justice to the original in every way.

Sceptical readers who do not want to sully their experience of the Mahabharata by reading modern adaptations do not need to worry as the author has ensured that the story can be independently read without the need to keep comparing with the original.

It has a lot of depth and the way it is written also leaves you completely engrossed in the book right from page 1. Not only Kurukshetra, but the entire trilogy is worth reading at least once.