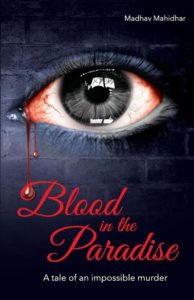 A murder mystery is always an interesting story to read. There is a lot of intrigue and mystery in a whodunit plot, with the reader always left guessing who the real culprit is and the motives behind the crime. And it is perhaps the only real genre that keeps the reader completely involved in the plot and trying to guess who the guilty party is. A well-constructed murder mystery always keeps giving enough details to keep the reader interested and not completely in the dark while also making sure it is not too obvious what’s going on.

Madhav Mahidhar’s “Blood in the Paradise” is one such well-crafted murder mystery. The story starts with the suicide attempt of Madhumitha Nandan, who wants to end her’s and her twins’ lives as she is unable to bear the torture of her husband Vikas. She acquires some Cyanide and mixes it in the water dispenser and drinks some of it. Vikas finds her before she dies and rushes her to the hospital but before that he also drinks some water from the same dispenser. His dosage is high and he dies while Madhumitha survives.

It is now up to DCP Vishwaroop and his team including inspectors Mallika and Jayadev to piece together what really happened, and whether Vikas’s death was accidental or if it was murder. They have access to Madhumitha’s diaries, which detail how badly Vikas treated her and how much he tortured her, driving her to take the extreme step of wanting to commit suicide along with her children. Who is the culprit? What is the real story behind all this? What forms the crux of the plot?

The plot of this mystery is excellent, with Vikas’s death an exceptional twist that is totally unexpected and out of the blue. It hits the reader in the head and suddenly piques their interest, seeing as it is not going to be Madhumitha’s murder they’d be trying to solve, but Vikas’s situation. The reader is completely engrossed in the plot, as all good murder mysteries ought to be.

The one flaw in “Blood in the Paradise” would be the random addition of character backgrounds in the story. For example, to tell more about inspector Mallika, the author could dab it in at the end of a sequence. It looked totally out of place and should rather have been interwoven in the narrative, which would have made it a lot smoother.

But otherwise, “Blood in the Paradise” is a fantastic book to read, and you should pick it up if you are interested in a good old whodunit.

Blood in the Paradise Book Review Madhav Mahidhar
by KC
Leave a Comment
Prev: A Walk In The Rain | Udai Yadla | Book Review
Next: The Orphan | S.R. Nair | Book Review