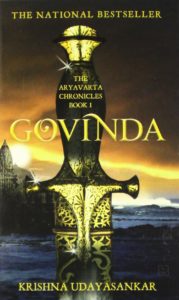 Every culture is blessed with some great mythological stories. Perhaps the most popular of them all is Greek mythology. There have been many writers who have tried to re-tell the stories in a way that does not make the characters into demi-gods and instead portray them as normal human beings who do great things. David Gemmell has always been my favourite for his version of the Greek mythology. I have read and re-read all 5 books of historical fiction that he wrote over and over again, and always wondered why someone couldn’t do the same with Indian mythology.

Until I read Krishna Udayashankar’s “Govinda”, book 1 of The Aryavarta Chronicles, I wasn’t really happy with most of the efforts that were done previously. Only the Shiva Trilogy was anywhere close to a good re-telling. But The Aryavarta Chronicles #1: Govinda was on a whole different level! Ms. Udayashankar did an extraordinary job in giving the readers a more realistic version of what could have happened in the tale of the Mahabharata. There are no godly characters that are flawless, but every one of them, including the protagonist Govinda Shauri, commander of Dwaraka, has human failings that make it all the more interesting to read.

What follows is Govinda’s role in ensuring that the Pandavas, led by Dharma Yudhistir, become the rulers of Aryavarta, though with the help of peaceful treaties rather than a violent civil war. The complex politics and the various missions that are carried out are what make the book a fantastic read. My favourite character, apart from Govinda Shauri, was Shikandin, son of the Panchala king Drupada. Even Panchali was a memorable character, playing an important role in the events in the entire book. The climax of Book 1 was perhaps the best possible re-telling of how the Mahabharata portrays Lord Krishna’s slaying of Shishupala.

There are numerous characters in the book, as would be expected from any story that bases itself on the Mahabharata. However, the narration is really good, and the reader would not feel any problem in keeping track of all the different threads of the story. This is especially made easy by the author due to the fact that a majority of the story is centered around one character, Govinda Shauri.

I urge you to pick up The Aryavarta Chronicles #1: Govinda as this is one of the better books written by Indian authors. You will not be disappointed and would definitely want to read the rest of the trilogy!