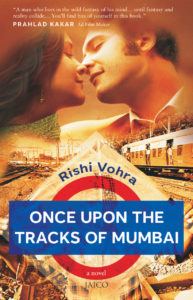 I was asked by my colleague, Ravi, to be a guest reviewer for BookGeeks.in.

Being a passionate reader myself, I loved this amazing opportunity and agreed to review the genres which I prefer reading.

I was with him when he received the copy of “Once upon the Tracks of Mumbai” and I told him that I’d review it because I liked the blurb. As much as it is not, it is always difficult to write a review for a debut novel.

We don’t know what’s in store for us, what to expect from the book and hence a yardstick for comparison is unavailable. I faced the same problems in reviewing this debut effort by the promising young author, Rishi Vohra.

Despite an off-the-mark beginning, the author’s knack at narration makes the story gripping after some pages.

The story is mostly believable even though some of the readers may find it otherwise. On a personal front, I feel it mostly makes up in the last pages with a straight-forward climax.

Outline: The story unfolds in the Railway Quarters next to the Bandra Station, Mumbai. BalwantSrivastav a.k.a Babloo is an unemployed son in Srivastav family, while his younger brother is in the beginning years of a promising career, much to Babloo’s chagrin.

Living in the same colony, Vandana is the girl of Babloo’s dreams. I particularly loved the character of Sikander (he owns a car) who always gets his girls.

Going through the ordeal of his dull life, an act of fate makes Babloo the Rail man – The Saviour, The Superhero. The story moves like a Bollywood Masala Entertainer.

Rest of the story is about whether Babloo can achieve his dreams or not. Even though it may be a bit too revealing but I would like to add that most part of the story is played out by the good luck of the protagonist.

The book doesn’t dwell in-depth for the scenes & character of a person. Autistic. Schizophrenic. Psychotic.

May be which is why it disappoints you in the beginning, but in no time you know what to expect. Almost clearly, this book is written to be made into a movie.

The best thing about this book is the free flow of the language and you can finish it off in one sitting of a fair amount of time.

The promise of the author is clearly demonstrated in most parts of the book; but the story, or lack of it, betrays the entertainment quotient in the capacity of narration.

Although the book is reason enough to await the next book(s) the author would be churning out, we hope that he comes out with a stronger storyline in his next novel.

Book Review Once upon the Tracks of Mumbai Rishi Vohra
by KC
Leave a Comment
Prev: The China Price | Alexandra Harney | Book Review
Next: Men on my Mind | Radha Thomas | Book Review