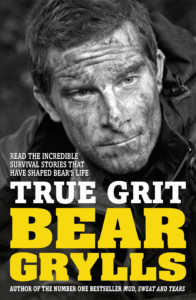 “You can’t become a decent horseman until you fall off and get up again, a good number of times. There’s life in a nutshell.”

The first thing that comes to my mind when I hear the word survival is ‘Bear Grylls’.

He is a renowned survival expert, and his show ‘Man vs. Wild’ on Discovery is one of my favourites. I religiously follow it.

It brings out the true picture of survival which and shows that it is not always attractive. He eats termites & insects and drinks his own urine in order to persist.

In each episode, a thing or two about survival can be learnt. And if you think you are safe, and such a need will never arise, you should read his latest book – True Grit.

It is an assemblage of real-life chronicles of survival; tales of people who have gone through hell and fought against all odds in order to survive.

The accounts in True Grit can be sketchily grouped into four categories – disaster survivors, prisoners of war, explorers and mountaineers.

Amongst disaster survivors, it tells us the story of Nando Parrado whose flight was crashed over the Andes. He had to resort to cannibalism and eat his dead co-passengers’ flesh in order to live.

17-year-old Juliane Koepcke’s flight too crashed over the Andes, and she had to prevail over swarms of mosquitoes, poisonous snakes, caimans, and travel without rest for 10 days before reaching civilization.

There are many similar stories about the raw desire of people to survive. Among prisoners of war, we have the stories of Jan Baalsrud who had to stay put on an icy plateau, with sub-zero temperatures, for 27 days to escape the Germans.

Louis Zamperini had to endure excruciating tortures in the hands of Japanese for months, but with sheer determination, he survived.

There are stories of many other Arctic and Antarctic explorers.

“Picture it. Nothing but ice and blizzard, as far as the eye could see; the encroaching certainty that if something didn’t change, the frozen ships that were their refuge would soon become their tombs.”

The great thing about this book is that not all the stories are successes. Bear Grylls has cleverly sprinkled in stories of catastrophes too while maintaining the spirit of survival.

‘True Grit’ brings you closer to realising the value of life and cherishing it. And for that, I recommend it as a must-read.