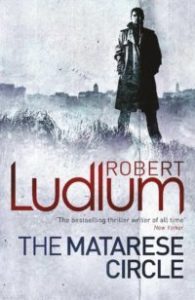 “Vasili Taleniekov, former director of the KGB – wanted by the Politburo. Brandon Scofield, the West’s most professional assassin, now considered dangerous and unstable by the State Department. These two men, sworn enemies, forced to join forces against a common enemy – The Matarese Circle.”

And that is the premise on which one of the greatest books I have ever read – The Matarese Circle – runs on.

On the face of it, the storyline may look predictable and ordinary; what with 2 enemies combining forces to defeat a common enemy.

But let me assure you, it is nothing like that. Set in the Cold War era, the depth in characters and the storyline is fascinating.


Take the case of Brandon Scofield, codename Bewoulf Agate. A professional assassin, he is branded as dangerous by his own State Department and is a wanted man after defying orders on a mission and breaking a fellow agent’s fingers.

His greatest enemy is Vasili Taleniekov, codename The Serpent. He is a former director of the KGB, who himself is wanted by the Politburo.

Both have killed each other’s loved ones and have only one thing left to do: to kill the other.

But forces greater than either individual are at work as a group known as The Matarese Circle is playing political games to take control of both the East and the West.

Their goal is to create order from the chaos so that the world will forever be under their control. They fund terrorist groups and military regimes so that they can create chaos.

Taleniekov is the first one to get wind of this plot, through his teacher, and seeks out Scofield as he is the only other person who can help him stop the madness.

But it will not be an easy task as Scofield is not ready to believe him and is of the opinion that Vasili is only plotting to kill him.

How the two manage to put aside their differences aside and work together to stop the Matarese Circle is the basis of the book.

Ludlum leaves no detail hanging and there is not a single event in the book that is wasted or is not linked to the story.

The book may seem slow at first, but it is necessary to construct the story and Ludlum does a fabulous job in making sure that the reader is hooked on to it.

People always talk about how the Bourne Series is fantastic. But anyone who is a fan of Robert Ludlum’s books will agree that The Matarese Circle is his greatest work.

So pick up a copy now and find out who the “Shepherd Boy” is and how these two mortal enemies stop him from taking over the world.