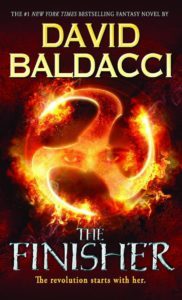 I have never read a David Baldacci before, but from what I could gather from so many of my fellow book lovers is that he is indeed a master craftsman of words. Unfortunately for me, that was not the case to be, for the very first book I read has put me off him completely. Storytelling is no easy job and it especially requires a lot of skill and effort when you have the herculean task of making the audience believe in magical creatures and other such irrational concepts of the fantasy world.

The Finisher by David Baldacci is about Vega Jane, a fifteen something girl who lives in a place called Wormwood, along with her brother John. Though their parents are still alive, yet the two have to fend for themselves as their parents are in a state of permanent inactivity (much like coma in our world). Wormwood is inhabited by creatures called Wugs (humans) and it is ruled by members of an elite club called The Council. Wormwood is surrounded on all sides by a ring called Quag (a place littered with deadly and ferocious beasts) where no Wug is ever believed to have set foot and come back alive. What lies beyond Quag, nobody knows.

Stacks is the place where Vega goes to work, and there works a close friend and mentor of Vega called Quentin Herms. The shock of the life comes, when Vega one day finds Quentin gone and has everybody suspecting her as his accomplice in crime. She is further bewildered to know that, Quentin has disappeared into the Quag and has also left behind a route map for Vega if she ever makes up her mind about leaving Wormwood. Meanwhile, as she begins the journey of unlocking the mystery of the Quag, she is increasingly been followed and interrupted by The Council in doing so. So, what will Vega discover? Will she be able to find her lost friend? What will be become of John, should she decides to leave?

The Finisher by David Baldacci is full of pleasant adventures which promise the thrill of seeking the unknown but this pleasure is highly marred by the fact, that many loose ends remain unattended in the plot. Many questions remain unanswered and ultimately the book fails to deliver the thrill and experience, which it so meticulously builds up before the end of the 500 odd pages. Towards the end, it appears nothing but a mere waste to have invested precious time in seeking something which was never to be found. The characters though fairly strong and developed fail to create the magic which was expected of this amazing author.

The only points which can possibly pacify the readers would be a sequel answering all doubts and connecting all the loose ends. Forgot to mention before, but a few things which I liked about the book were its characters – that of Vega Jane, Daniel Delphia and Morrigone; the hunger games inspired cover was also quite eluding and last but not the least, the illustrations were also handy while picturing the beasts and the places mentioned in the book. Overall, The Finisher by David Baldacci was an okay read and I would rate it a three out of five stars.