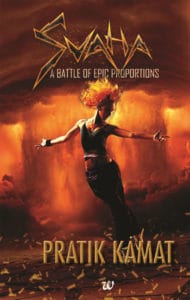 I deem mythologies to be superhero stories of the old times; stories in which the hero, a simple man, becomes the saviour and a God due to the adverse situations he is put in. India is blessed with a rich mythology, and a very thin line separates it from history here. But in modern times, superhero novels are a rare affair in Indian lit; very few of these have been written like Samit Basu’s “Turbulence” and Nizam Ahmed’s “Faceless”. I have always deliberated, why Krishna or Ram or Hanuman can’t be a modern superhero. Pratik Kamat’s “Svaha” attempts just this – Indian mythological characters are modern superheroes fighting mythological villains, and saving humanity and the world.

The idea of “Svaha” is that there exist two worlds – one for humans, and one for supernatural beings. These two worlds are connected through a portal, the location of which is known to none, until now. Certain selfish beings, to further their selfish agendas, try to misuse this portal by awakening the greatest villain of Indian mythology, and bringing him to earth, and if they succeed, humanity will end in a matter of days. Only one person can prevent this from happening – a 19-year-old reckless young teenager, Slash, and she is helped by a mythological superhero – one who can fly, and is unaffected by bullets or missiles, Soldier X. In the midst of this, all are Major Khanna of FORCE ONE, Paramacharya of the Trimbak math, The Council and The Deus Corp trying to achieve agendas of their own. Why is Slash ‘the chosen one’? Can a 19-year-old girl defeat the greatest villain of Indian mythology? Who is Soldier X?

“Seconds away from crashing to the ground, I felt the plane stabilise all of a sudden. I tried looking out of the window and there he was… This man holding the entire plane together, flying with it like it was a toy plane. He brought me safely to the ground.”

The idea behind “Svaha” is exceptional and Pratik has executed it flawlessly. His narration is crisp and free of unnecessary detailing. The chapters are short which keeps a reader glued to the story until the last page. The characters in the book – the protagonists as well as the antagonists – are brilliantly portrayed.

There are many sub-plots but the coherence between them, the rationality behind them, and the way they guide you towards the climax is admirable. Though the identity of the characters can be deduced from the starting pages, the suspense which is revealed in the climax is unplumbed. A few loose strings, a few questions are left unanswered, probably for a sequel.

“Svaha” will definitely spearhead the Indian superhero writing scene, and I wish Pratik much more such delightful books.

Would you be interested in reading a superhero novel written by an Indian author? Do let us know in the comments below.