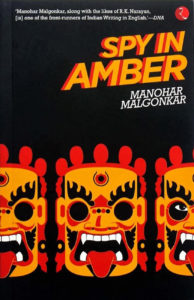 There are many Indian authors who have made it big on the International stage; Rabindranath Tagore, R.K. Narayan, Salman Rushdie, Vikram Seth, Jhumpa Lahiri, Kiran Desai to name a few. Manohar Malgonkar, whom R.K. Narayan once referred to as his “favourite Indian novelist in English”, is a name which very few of us have heard of, despite his superior writing skills. In an era when Indian writing was mostly limited to socio-cultural themes, Malgonkar wrote chilling spy thrillers. Reading his books makes you wonder why he isn’t read as widely as he deserves. A Bend in the Ganges, Distant Drum and Spy in Amber are some of the best thrillers Indian writing in English has produced.

Spy in Amber, first published in 1971, is set during the time when tensions between India and China were at its peak. Hidden away from the world, in the deep belly of the Himalayas lies the Ragyabas monastery which has a treasure worth millions in its possession. Fearing Chinese invasion, the head monk decides to hand over the treasure to India for safe-keeping (the story of Chris Kuzneski’s ‘The Hunters’ has a similar theme). But, the Chinese have different plans. They send in their best agents, Chomo Jung and Pempen Kachin, to India to sabotage the monastery and loot its treasure. Between them and their success is Colonel Jeet Mansingh of Military Intelligence. The location of the monastery is known only to two outsiders, Gomti and Bhatta but both of them have been murdered by the Chinese agents. The rest of the story is a game of hide-and-seek between Jeet and Chomo. Can Jeet discover the monastery? Will he be able to secure the treasure? Will the Chinese beat India again?

“One mustn’t get heated up about the murders. What is more important is to find out what the murderers are up to.” “A spy never kills wantonly, or in passion, but always in cold blood; only out of necessity.”

Reading Spy in Amber will certainly take you back in time; the protagonist drives a Ford Falcon, spies use Remington typewriters, smoking is considered manly, and tourists are allowed to climb the Qutub Minar. The narration style is superb; without the advantage of fancy technology or monster gadgets, Malgonkar is able to create a level of intrigue just with his description of the characters. Jeet Mansingh is an ideal secret agent, trained in small arms and an expert in hand-to-hand combat. Chomo is a legend in the military circles feared for his ruthless nature, and Pempen is a perfect femme fatale. The characters of PK, Jeet’s boss and Nirupa, his nurse, too have an important role in the plot.

I wouldn’t lie to you saying that this book is at par with Ian Fleming’s novels, but when we have our very own spy hero, why not give him a try?