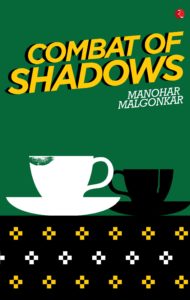 Racial discrimination was one of the major reasons behind the Indian independence struggle. Brown people were treated like dogs; sometimes even worse. Though inter-racial and illicit relations were prevalent, they seldom translated into marriage. Even the not-so-white Anglo Indians were treated with suspicion and disgust. Neither white nor brown, they were not much accepted into either circle. Manohar Malgonkar’s Combat of Shadows is the tale of one such Anglo-Indian woman who dreams of becoming a pucca memsahib to an Englishman but has to face the reality of racial discrimination prevalent in pre-independence India.

‘Above all, she could never have laid bare to any outsider her own personal dream of becoming someday a Sahib’s lady, going into the reserved, all-white clubs with her head held high, escorted by an Englishman without the slightest trace of coloured blood.’

Henry Winton is a plantation manager for a British tea company in the scenic hills of Assam. Dividing his time between hunting and managing the estate, Henry is a content man albeit the lack of a woman to warm his bed. To this end, he appoints Ruby Miranda, an Anglo-Indian, as a teacher in the estate school. She becomes his mistress and helps him break his loneliness in the faraway hills of Assam. Being rootless and unwanted in India, she desperately tries to woo Henry and become his wife.

Henry’s boss, Sudden Dart, an archetypal and orthodox Englishman, reminds Henry of ‘the thin line that separates fun from serious involvement’, forcing him to reject Ruby’s proposal. Spurned and dejected, and with nothing more to lose she vows revenge. Meanwhile, life goes on for Henry; he gets married to a true blooded British woman, sorts out union protests at the estate and gets busy with his hunting; he forgets all about Ruby. Will his karma catch up to him? Will Ruby forget her mistreatment and rejection, and forgive Henry? Will Ruby ever feel wanted and loved? This forms the rest of the story.

Combat of Shadows is sprinkled with several other such inter-racial encounters, all with sad consequences. The love story between Jean, Henry’s wife, and an Anglo-Indian, Eddie Trevor, ends with Eddie’s mysterious and pre-planned death. When Henry’s boss, Sudden, gets involved with a native woman and gets her pregnant, she is silently married off to his watchman. All the British estate managers make use of the native coolie women to satisfy their urges, and if any complications arise, wash off their hands by paying a couple of hundred rupees. To them, the natives are mere commodities meant to satisfy their physical needs.

Manohar Malgonkar has done a top-notch job in his description of the multi-dimensional Indian society during the pre-independence days; not only of the Raj but also of the British businesses, high-society clubs, Anglo-Indian, peasants, labourers and self-serving politicians. The sensitive theme of inter-racial and inter-cultural relationships is painted with such an artistic touch, which makes Combat of Shadows a must read.