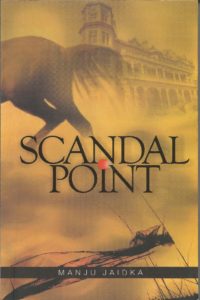 The genre was the sole reason why I decided to read and review this book.

I associate this genre with greats like Chris Kuzneski, Dan Brown, Andy McDermott or Ashwin Sanghi and hence my expectations are generally high.

So, when I read a new book by a debut author, I end up being disappointed if the plot is not as fast-paced and the narration is not as gripping.

This is what happened to me with this book.

The story is set in the last decade of the 19th century.

The plot revolves around the love affair between Maharaja Rajendra Singh of Patiala and Betty, the daughter of the Viceroy of British India.

This story draws its inspiration from the modern myth associated with Scandal Point, a location in Shimla.

It is believed by many, that Maharaja Bhupinder Singh of Patiala eloped with the daughter of a British Viceroy from this point in 1892.

But historical records show that Bhupinder was only 2 years old at the time and hence the author concludes that it must have been Maharaja Rajendra Singh, Bhupinder’s father.

The story explains, in detail, the Maharaja’s visits to the Viceroy Lodge in Shimla, his meeting Betty, falling in love with her, their elopement, of her stay in Patiala and their eventual marriage.

The author uses equal measures of history and imagination to reconstruct what would have transpired, in those days, in the Patiala royal palace.

Soon after their marriage a prince, Richard Ram Rahim Singh, is born.

The author writes about the jealousy of the elder Maharani and the attempts on the life of Betty and the infant prince. Many such unavoidable circumstances force the Maharaja, Betty and the prince to part ways and live separately.

The rest of the story is about how Maharaja Rajendra confronts this situation and bounces back to continue his royal duties; and about the journey of the prince RRR Singh, now Kartar Singh, to trace his roots and reconstruct his long-forgotten story.

At the beginning of the book, the author clearly mentions that most of the events are imaginary and have to be taken as such.

A major portion of the book is filled with narrations about Betty’s inner tensions, before and after her marriage to Rajendra, which makes it a boring read.

The language is good and easy to read, but definitely not gripping.

I think, reading about the reconstructed love story of a long-forgotten king and a lesser-known white woman, would appeal to very few readers.

Though I appreciate the author’s attempt to rewrite some lost pages of history, as a devout fan of Historical fiction, I must say the attempt was weak and uninteresting.

A little bit of excitement in the plot and some more details about the culture or lifestyle of those times would have done a remarkable job of making Scandal Point interesting to a wider reader base.