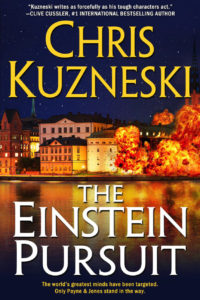 To say that Chris Kuzneski is one of the best action/thriller writers of modern day wouldn’t be an over-statement. Time and again he has proved that with his signature series – ‘Jonathon Payne and David Jones’. Payne and Jones, both ex-commandos of the MANIACs (Marine, Army, Navy, Intelligence, Air Force and Coast Guard), are a formidable team. Though retired, and well-adjusted to civilian life, they regularly find themselves in situations where their unique skill set is required to either save the world, rout mysterious bad guys or unearth long lost treasures.

I had interviewed Chris Kuzneski in June 2013 and he had talked about his forthcoming book ‘The Einstein Pursuit (Payne & Jones #8)’. Since then I have been wanting to read this book because I have a strong opinion that Kuzneski has a unique style of mixing history, science, modern technology and action-rich sequences without being overwhelming, which very few authors can successfully pull off; and because I love reading his books.

“The lab was packed with many of the brightest minds in their field, all focused on a secret project that would change mankind forever. In a matter of seconds, they would all be dead.”

A secret lab in Stockholm, Sweden, has all the greatest scientific minds of the world working on cutting-edge science, when it is burnt to the ground, killing all the scientists inside. This brings Interpol director Nick Dial to Stockholm to pursue the case. When Mattias Sahlberg, a scientist, finds his life in danger, he reaches to Payne for help, and it doesn’t take Payne much time to conclude that Stockholm and Sahlberg are not coincidences but a sequence of well-planned events leading to something big and dangerous. ‘Why was the lab gutted?’ ‘What were the scientists in the lab working on?’ ‘Who is Sahlberg and what is his link to the Stockholm lab?’

“They stepped off the ramp and plummeted into the void. Adrenalin surged through their systems as they fell faster and faster. By the time they reached terminal velocity, the muscle memory they had honed during their countless previous jumps kicked in.”

Payne and Jones realise that only Sahlberg can answer these questions and lead them to the perpetrators, and for that, they have to save his life at any cost. In their endeavour, they travel to Czech and Italy and come face-to-face with the mysterious Einstein Group, a club whose existence is known only to a handful of people.

Unlike Kuzneski’s earlier books, the central theme of The Einstein Pursuit is science, but he executes it perfectly. Even complicated things such as genetics, cellular biology and human anatomy are well explained. The idea behind the science too is not unrealistic and in fact, very interesting.

Though Payne and Jones are the main protagonists, Nick Dial, the Interpol chief, who is just a marginal character in Kuzneski’s previous books, runs the show in this book. I will not be surprised if the author starts a ‘Nick Dial series’ in the future.

A blend of science, mystery, action and the MANIACs makes The Einstein Pursuit a must read for all thriller lovers.