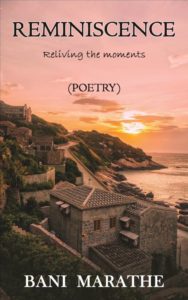 In this debut collection of 23 odd poems, Bani Marathe speculates unpretentiously about love, life and existence in simple vernacular English. It is a refreshing collection from a female perspective. It mentions about adoration through the eyes of a woman who has a high regard for a man and craves for some quality time together. It is not clear who this marvellous Muse is as the poems do not address any character specifically. The gender roles are delightfully swapped with the woman in full control. Very little is known about the identity of the poet-narrator or anything about her background and profession. This then sculpts her into the larger community of womankind as she becomes a generic representation of every woman who has ever felt the beauty of love. It is a stature of love that is capable of encompassing many other emotions within it such as hope, joy, honour, respect and pleasure. If anyone of these breaks loose, then the whole falls apart dreadfully. But it is clearly devoid of any feelings of possessiveness.

While Reminiscence is specifically about romantic love, it also maintains a strict sense of heteronormativity where the woman, as a caregiver, loves unceasingly and selflessly but the male ego fails to recognise it time and time again. That does not, however, indicate any reason for homophobia though it is completely out of the purview of this collection. The poems describe a woman’s desires and wishes, her sentiments and insights without making anything sound trivial or girly. It is every bit intelligent and observant about the minute details and behaviour of the man. She is unsure if her feelings will be reciprocated but she admires the man for the person that he is and the shade that she has received in this alliance.

The poems in Reminiscence are written in four to eight stanzas of at most five lines each with a consistent though not really identifiable rhyme scheme. The first person poet promises loyalty in return of being cared for. It is this emotion that is recurrent throughout. She is happy with small things and is not very demanding. Some startlingly moving lines provide a sense of universal truth such as: “I want to love you fearless of this world/ For sometimes the right feelings/ Don’t always give us the best feelings.” Though the language is simple, Marathe is bold in her diction.

Throughout the collection, the imagery is minimalistic yet artistic as seen in ‘land of frozen dreams’, ‘silent seduction’, ‘edge of our love’ to mention a few. Marathe terms it as a kind of ‘silent poetry’ and it is undoubtedly so. There is no use of any elaborate or extravagant language but one must be capable of reading between the lines. It is in what is left unsaid that the true meaning resides. The poems are poignant and classy. Initially, the tone is persuasive directed at the one she secretly admires. It is in the poem Frozen Dreams that things take a turn and she is hit by reality like a truck. What follows is To Let Go. The Muse walks away as she voices her nightmares. She wants to be trusted with her ability to make things work out. It has only taken a moment to turn things around and in these moments her life has been ripped apart. She feels the injustice and cruelty done to her. There is a sense of complaint, betrayal, loss of hope, heartbreak and a bundle of groundbreaking realisations. Yet, she is unwilling to leave although she lets go. Things start to get stormy, her ideas turn more and more unrealistic and there is a frantic frenzy about all that is left unanswered and incomprehensible. Quickly regaining self-control, the balance is maintained with Silence as her new identity.

The poems in the middle section of Reminiscence get very candid and responsively forthcoming. Emotions run riot. The hurt of rejection cuts through her soul. With no one beside her to share her sorrow, she only finds her own solitude to embrace. It is the dilemma within her in which one half of her wants to move on and the other wants to reclaim what she had thought she deserved. What needs to be clarified is that the upheaval within the self is not a result of childish desires of wanting to obtain a particular thing. It is rather the outcome of the thought of having been cared for, feeling treasured and the joys of belonging somewhere.

Reminiscence is filled with sensitivity and the reader can only hope and implore that such tender hearts find true companionship someday. Is the peace achieved in the final section a result of reconciliation, rediscovery or replacement? What is remarkable to note is the graph of growth that the poet-narrator displays in her ability to shed altruistic motives and start living for herself.  Some expressions are so honest that it will leave a lump in the reader’s throat struggling to hold back tears. It is highly relatable to anyone who has been through rejection, loss of a dear one whether to a natural death or suffering from a terminal disease. It also resonates with the idea of love in the manner of concern while being by one’s side.

“Love surrenders/ when we come together”. It is the deep desire to go back to the carefree ways of girlhood again that dominates the concluding poems. She wants to be far away from the eyes of a critical society that is ever so hard on its women. There are indulgences of wishful thinking while wanting to reach out to the stars and enjoy life on her own terms. It is perhaps also an indication of the difficulties of womanhood- not just societal but also biological. The poems are very easy to read and of moderate length. The title poem Reminiscence which is also the jewel of the crown is printed on the back cover. It is the most touching of the entire collection in which distance and time meltdown to create a singular frame of beauty, truth and desire that is bound to move any person still young at heart. With a compassion that is unparalleled and unique to her writerly persona, Marathe paints the picture of a very promising narrator and poet.