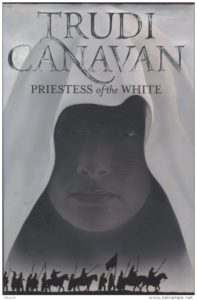 I picked up Trudy Canavan’s Priestess of the White from a second-hand bookstore without having read any of her previous books.

I was intrigued by the cover and the blurb excited me enough to make me buy the Book One of the “Age of the Five” series. It’s a big thing for me as I usually do not go outside the authors that I know I like.

And I must say, I do not regret buying it at all. Trudy Canavan has done a very good job in creating a make-believe fantasy world and immersing the reader fully into it.

The main plot of the book revolves around Auraya and her fellow Whites, who are the Gods’ chosen and carry out their work. Auraya is the 5th and final White chosen by the Gods and she starts training under Dyara, who has been a White for a considerable amount of time.

Things get a bit complicated as she begins an affair with her childhood mentor, Leiard who is a Dreamweaver.

Dreamweavers are healers who are considered as heathens as they do not follow the Gods of the White and if word goes out that a Chosen One is having an affair with a Dreamweaver, it would be a disaster.

Auraya and the other 4 Whites start their plan of uniting Northern Ithania as it is the will of the Gods. For this, several peacekeeping missions are carried out by the 5 Whites.

Auraya comes in contact with another heathen cult from the south known as Pentadrians and it becomes evident that war is soon to be fought between the 2 cults.

The Whites summon all their allies and march towards the battlefield to face the might of the Pentadrians and send them back.

Trudy Canavan has a very simple but effective style in telling a very complicated story.

There are numerous plots and sub-plots in the story, but nowhere do you find yourself confused or missing the thread. It is all put together beautifully, with each character developed meticulously.

Being the first book of a 3 part series, the focus, understandably, was laying the groundwork for the epic.

That being said, I did feel that the ending was a bit too tame after all the build-up that was given in the lead up to it. You truly expected a more ferocious and violent ending than the tame one that was provided.

However, a peek into book two, which is provided at the end of this one, promises to be very interesting.

I know I would be buying the rest of the books in the series. You should try it too. This is one book that you will definitely enjoy!