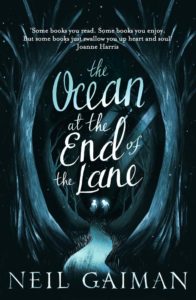 A little boy. An unnamed monster. Birds from an unnamed realm which feed on said unnamed monster. A woman so old that she witnessed the Big Bang. A girl who has been 11 years old for an uncertain period of time. A pond that is an ocean.

These are just a few of the elements in “The Ocean at the End of the Lane”, each one more outrageous than the next, exactly how a fantasy story should be. The story is narrated as a flashback as our anonymous hero visits his childhood house and memories of bizarre events long forgotten come flooding back to him.

What Neil Gaiman does most skillfully in this book is, build suspense. There are about 30 pages in the first half of the book where, just after the monster has been encountered, nothing happens. The protagonist is going about his life as usual and as he believes that it’s all over, you almost will too. Yet, you’ll have this niggling feeling that something very bad is going to happen very soon. The anticipation is torture and brilliantly constructed.

The protagonist reacts to extraordinary events with utter nonchalance, allowing the real and the unbelievable to fuse so effortlessly. At first, he is just a sad ordinary boy whose birthday party no one attended – next, he’s meeting three queer women from another time, one of whom he accompanies to get rid of the monster – and then (every Hollywood scriptwriter’s favorite), the boy’s new nanny bears an uncanny resemblance to the monster.

But it’s not all bad guys and unlikely heroes – it is about the helplessness, naiveté and insatiable curiosity of childhood. Your heart will go out to this friendless boy who is neglected by his parents. Your skin will crawl when he feels the monster inside his body. Your blood will run cold when he runs away from his house at night. And, all the while, you’ll wonder what mysterious episodes from your childhood are lurking in the corners of your memory.

Packed with twists and surprises, this is fantasy-cum-horror par excellence. You just might need to sleep with the lights on after reading “The Ocean at the End of the Lane”.

Book Review Neil Gaiman The Ocean at the End of the Lane
by Bhavna
Leave a Comment
Prev: A Midsummer’s Equation | Keigo Higashino | Book Review
Next: Top 10 Books on Ganesha