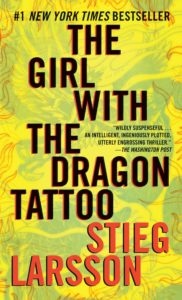 Stieg Larsson’s Millennium series is one of the most sold series in the world and yet I only got a chance to read it last August and I can only say one thing that the thrill was worth the wait for everything about “The Girl with the Dragon Tattoo” screams wow! The story is about a detective Mikael Blomkvist who co-owns and runs the millennium magazine which is known for its investigative journalism in Sweden. But Mikael has been recently indicted on false charges which land him up a three-month term in jail. Lisbeth Salander is a peculiar girl who has a history of unsocial and violent behaviour and is kept under observation by the guardianship authority. She has to report to her guardian about her activities who then evaluates her and files her reports for the authorities. However, Lisbeth has an unmatched talent – she is a hacker and a really good one at that!

Somehow circumstances make Mikael and Lisbeth come together and work on the disappearance of Harriet Vanger which happened almost four decades ago. The old school Swedish industrialist Henrik Vanger offers Blomkvist an irresistible offer which he finds difficult to turn down. The result is Mikael working on the case. All members of the Vanger family disregard and discourage this futile investigation simply because there is absolutely no possibility of solving it after almost four decades and multi-millions having been spent on trying to uncover the mystery. But what Mikael and Lisbeth uncover not only shatters him and Lisbeth but also the entire foundation of the Vanger family. The truth behind the cover is gory and brutal and there are forces at work who will try anything possible to keep the secret from revealing itself.

So are Mikael and Lisbeth in danger? Will they be able to uncover the entire truth? Will they find out who is behind the four-decade-old disappearance case? To know this and much more about Mikael Blomkvist, Lisbeth Salander and the scandalous Vanger family, read this nail-biting novel today.

The plot of “The Girl with the Dragon Tattoo” is extraordinary. The disappearance case may look quite normal and insipid from the onset but as one digs deeper into the pages of the novel, it turns out that the Vanger family has a cellar full of family secrets. Secrets which they will do anything to protect and defend. On the other hand, however uncanny the two of them may look together – there is just something about Mikael and Salander which will amuse the readers to no end. They are simply perfect as a team and even as unconventional lovers they rock the scene quite well.

The characters built by Stieg Larsson are all intriguing and play their parts well and last but not the least the Harriet Vanger mystery is definitely something to look forward to. All in all “The Girl with the Dragon Tattoo” is a fantastic read and thus is a “must read” recommend from my end. I rate the book five out of five stars and eagerly look forward to reading the next part.