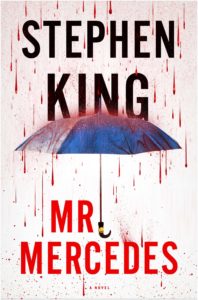 Every genre has a certain aspect that the author needs to get right while writing. If it’s a romance novel, the main premise would be about the protagonists finding each other, through whatever troubles they face. For horror stories, it is essentially a single idea that drives the entire book. But for crime novels or suspense thrillers, the book runs on the base plot. And whether the reader ends up enjoying a crime novel is totally dependent on how the plot unfolds. If it is unchartered territory for an established author, then the scrutiny is even more than usual.

Stephen King’s Mr. Mercedes is a crime mystery novel, and is a genre that the author has never properly attempted before. King has almost always dealt with supernatural and horror themes, and quite successfully at that. His latest offering, his 57th novel, deals with a completely different genre as the author tries his hand at a crime thriller.

The story starts at a job fair, where unemployed people are getting in line in the early hours of the morning in hopes of getting a job. To their horror, a Mercedes appears suddenly and plows into the crowd killing and maiming a few people. The plot cuts to retired detective Bill Hodges, who was on the case but was unable to catch the killer, gets a taunting message from him. From there begins a cat and mouse game, with Hodge trying to catch Brady Hartfield, who likes to call himself Mr. Mercedes.

While the story may have started at a recession hit time in America, it is not the environment in which the rest of the book runs. In fact, rarely does King allude to the effects that recession has had on people in general. Rather, the story runs more in the small world realism mould that King is famously known for. Even the main characters, Hodge and Hartfield, are neither extraordinary individuals nor particularly special. Hodge actually contemplates committing suicide before he gets the taunting message from Hartfield, who himself has no grand reason or statement to make as the reason for his killings.

The story, more or less, is psychological in nature, showing the reader how individual psyches may have been affected because of the dire affects of the recession, and what forms it can take in. Sometimes, this psychological angle can go a bit longer than needed, causing a break in the flow of the suspense in the book. In fact, the pace is not at the same level as you would expect in most suspense thrillers, but it does pick up towards the end.

On the whole, Mr. Mercedes is certainly worth a read, though one may not have the same satisfaction as King’s usual horror novels.