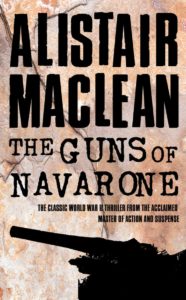 “A team bound on a mission to change the course of a war. A mission that promises no hope for survival as the odds are monumentally stacked against them. Yet, they go. For, if not them, there is no one else…”

The Guns Of Navarone by Alistair Maclean is one of the best books set during the World War II period. Those who have read Maclean novels know that it’s not just the plot that keeps us captivated, but it’s the amount of detail and depth he renders to the characters in the book, which makes us flip pages one after the other. And with regard to characters, Maclean brings us the trio of Keith Mallory, Dusty Miller and Andrea who go a long way in capturing our imagination and give us an insight of what the word ‘Heroes’ actually means.

Now, for the plot. The Guns Of Navarone is set during the WW II period on the fictitious island of Navarone, where the German Army has established a very strong base. And from this position, they are set to attack the island of Kheros, which happens to be the last of the islands under the occupation of the allied forces. The Germans have all aces up their sleeves as the Allied Forces Navy are unable to lend any support to the forces on Kheros, primarily due to the ‘special guns’ the German army has in position covering the sea route – ‘The Guns Of Navarone’.

The Allied Forces have made numerous attempts on taking out the guns with no success whatsoever. And as the last throw of the dice, a very special team of operatives are assembled. Their mission – “Take out the Guns before the Germans start their assault on Kheros”.

The team comprises of 5 members:

Captain Keith Mallory: The leader of the team. The legendary mountaineer turned commando from New Zealand.

Andrea: The complete fighting machine. (Incidentally, my favourite character in the book)

Together, they embark on the mission that many would deem suicidal. They have to succeed for the sake of the people on Kheros. Failure is not an option for these men and with some help from the rebels in the island of Navarone they take the fight to the Germans. Will they succeed in destroying the guns in time? In The Guns Of Navarone, Maclean goes on to weave a spell on the readers with feats of courage, acts of betrayal and loads of breathtaking action.