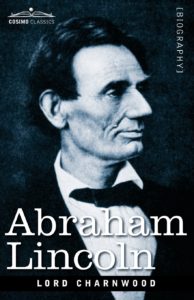 Abraham Lincoln is one of America’s greatest heroes due to both, his incredible impact on the nation and his unique appeal. Lincoln’s is a remarkable story. A story of rising from humble beginnings to achieve the highest office in the land and then a sudden & tragic death at a time when his country needed him the most to complete the greatest task facing the nation. Lincoln’s most significant action as the President was Emancipation Proclamation which paved the way for the Thirteenth Amendment and the Abolishment of slavery. Lincoln’s distinctively human and humane personality and historical role as saviour of the Union creates a legacy that endures the test of time.

The masterpiece Abraham Lincoln by Lord Charnwood is the most comprehensive and detailed biography of Lincoln. The book is written in a formal style which I found as a deterrent to becoming an interesting read. Lord Charnwood’s Abraham Lincoln is one of the clearest analyses ever attempted. Abraham Lincoln by Lord Charnwood possesses a noble rhythm that elevates it to the status of Classics. There have been several biographies that have been published ever since the publication of this one, yet this particular version still counts as the best. Many contemporary historians consider this meticulous and superbly crafted work the quintessential biography of one of America’s greatest Presidents.

The writing style in Abraham Lincoln by Lord Charnwood is reverential. A slight free flowing language would have made the reading better. Anyhow, it is a good read and I recommend the book. The book explores the reasons behind many of Lincoln’s actions and takes the whole field of “Lincoln Studies” to an international level which later writers would keep in view. Charnwood’s study of Lincoln’s statesmanship introduced generations of Americans to the life and politics of Lincoln. The author’s observations in this book are so comprehensive and well supported that any serious study of Lincoln must take into account his conclusions.

Abraham Lincoln by Lord Charnwood should remain robustly alive as long as readers are fascinated by the vagaries of individual character and fascinated by master storytelling. Those unacquainted with the book should read it. Those who have not read it recently should read it again. As for Abraham Lincoln- He rightly said, “The short and simple annals of the poor, that’s my life and that’s all you or anyone else can make out of it.”