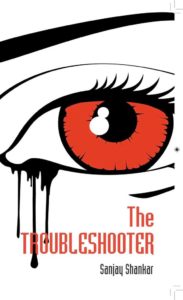 After the success of the Banker series written by Ravi Subramanian, a number of books on similar subjects have been written. A few of them have been successful like ’31: A Thriller’ by Upendra Namburi; a few of them have gone bust. Coming from a non-finance background, my interest and knowledge in finance is limited. So, when I got The Troubleshooter from Leadstart, I was a bit apprehensive about doing the book review because, after reading ‘The Bankster’ I had decided not to read any more similar books. But as fate has it, my teammates were busy and the responsibility fell on me.

The Troubleshooter has nothing new to offer in terms of the plot. The story is pretty straightforward – There is a banking scam involving a few bank employees and the protagonist fights tooth and nail to uncover the scam and catch the offenders. The plot begins in IIM Bangalore where Avni and Sid are best friends. After graduation, they slowly drift apart and carry on with their own lives. Then the story is taken ahead 15 years in time where Avni has become a financial journalist and Sid, a banker.

When a man approaches Avni for help regarding his investment in an offshore fund in Vantage Financials, she smells something fishy and decides to investigate. All her investigations point towards a scam in Vantage but she doesn’t know what. To deter her from her attempt, she is bribed, threatened and kidnapped but still, she carries on with her investigations. When all these fail, the folks at Vantage call their reliable troubleshooter to solve this problem. The rest of the plot is about Avni’s efforts to bring the offenders to book and to uncover the scam and about the troubleshooter who will go to any extent to stop Avni.

The Troubleshooter, initially, is very interesting and intriguing. But my interest withered away once Avni reaches Bangalore to meet Sid and takes him to Rishikesh. Once in Rishikesh, their long-lost love is rekindled and the romance starts. The story becomes very slow from there on. Though the language in the book is rich and simple, it becomes very monotonous at times and lacks variety. The scam has not been explained very clearly and the agenda behind the actions of certain characters is very unclear in the book. This makes the climax confusing and frustrating.

The characters are one positive thing for the book. Avni is a smart and independent woman, just like all protagonists are in women-centred books. She is fearless and doesn’t shy away from investigating into anything or anybody. She is a martial arts expert and can take down 3-4 guys at once. Sid is shown as a very practical and calculating person who always weighs the pros and cons before any action. The Vantage management – Jain, Solanki, Agarwal etc. – are all very ruthless and war-hardened veterans who will not stop at anything.

The climax is a dud. It is very abrupt and the logic behind it is missing. Sanjay is definitely a promising writer and I will certainly wait for his next book but ‘The Troubleshooter’ is a big NO for me.