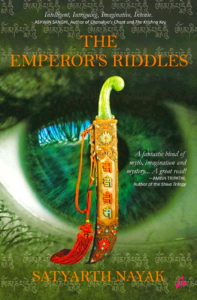 “We owe a lot to the Indians, who taught us how to count, without which no worthwhile scientific discoveries could have been made.” – Albert Einstein

The contribution of ancient Indians to the development of various sciences is substantial. Aryabhatta invented zero and gave us the modern number system. Over 2600 years ago, Sushruta conducted surgeries like cataract, fractures, and brain surgeries. Bhaskaracharya calculated the time taken by earth to orbit the sun in 5thcentury. Even our epics talk of episodes which are very similar to many modern inventions. Ravana’s ‘Pushpaka Vimana’ is an ancient aeroplane. The astras used by devas and asuras are nothing less than modern missiles. There are much more such examples from all fields of science, but the world, by large, does not know about them either because of lack of preservation of our ancient texts or because of our history of foreign rule. Satyarth Nayak has taken this idea – our rich ancient knowledge of science – and converted it into a historical fiction, “The Emperor’s Riddles”.

When Ram Mathur, an expert in Buddhist history, is murdered on the ghats of Ganga in Benares, his daughter Sia calls Om Patnaik, an author of mysteries and esoteric, for help. The scene of Mathur’s murder is gory – a letter is carved on his face and an eyeball is missing, and it is up to Om and Sia to unearth the identity of the killer. Om and Sia only have an email from Mathur to help them in their chase, which takes them back in history. They have to unlock nine riddles involving nine symbols to unlock the mystery of the email. Solving the final riddle will them the holder of an ancient knowledge; a knowledge so powerful that even Gods would kill for it.

“The desecration of Kalinga had made the Dhammaraja conscious of the potential evil in science. He celebrated technological progress but also realised that in the wrong hands it could change into a curse. The Emperor gave the constellation a simple instruction. It was to conceal all such scientific knowledge that could be easily misused to destroy human life.”

The book progresses in two parallel timelines; one, where Om and Sia are hunting for the killer and solving the ancient riddles, and another, where an Emperor, bitten by his own Karma, decides to repent by destroying dangerous scientific knowledge. This is an exciting narration style as seen in Ashwin Sanghi’s “Chanakya’s Chant”, but Satyarth couldn’t tap into its beauty to the full extent. It becomes confusing after a time and doesn’t add much value to the plot as a whole. The use of riddles as clues forces a reader to race his mind, which keeps him glued to the pages. The language is quite succinct and plausible. Om failed to impress me much, but he certainly could have been a more powerful character with a little focus on character build-up.

The identity of the killer, revealed in the climax, is a superb job of suspense and blew me away. A good thriller with a decent dose of history, this is an exciting book to read.

Do let us know your feedback in the comments below.