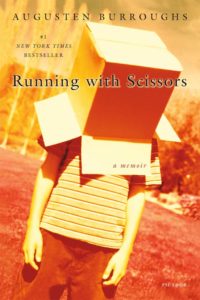 “Running with Scissors” is a memoir recounting American author Burroughs’s outrageous adolescent life. As a child, Burroughs was a neat-freak, obsessive about keeping his hair, clothes and surroundings picture-perfect. His parents were constantly having violent fights and when they finally decided to divorce, Burroughs was sent to live with his mother’s psychiatrist, Dr. Finch, whom he was later adopted by. Life there was a total turnaround from what he was used to – the Finches lived in abject squalor with scant consideration for personal hygiene, and the children followed no rules because Dr. Finch believed that anyone older than 13 years should be in charge of their own lives. The psychiatrist and his children were nuttier than the shrink’s maddest patients, but Burroughs managed to acclimatise himself and form close bonds with the Finch children.

There was never a dull moment in the crazy Finch household and there are multiple moments of slapstick hilarity – in one incident, Dr. Finch believes that god is talking to him through his faeces and he tries to decipher these messages, even sending his conclusions to his patients in a newsletter.

“Running with Scissors” has received a lot of criticism particularly because Burroughs was sued for defamation by the Turcotte family who claimed that the Finches in the book are based on them. Mr. Turcotte claimed that all the events in the book are sensationalised and paint his family very unflatteringly. Burroughs settled with the Turcottes and agreed to call the work a “book” instead of a “memoir”, but continued to maintain that all events in it are entirely true.

What is meant to be a funny semi-autobiography, also has a lot of solemn elements. Burroughs covers a wide range of issues like homosexuality, mental illness, domestic violence, rape and alcoholism. It is a thoroughly engaging read, largely because of the sheer histrionic value. Every single character is unique in their own bizarre way and the absurd events are comical and, at the same time, horrifying.

Regardless of whether it’s the memoir that it claims to be or it’s entirely fabricated or (as I suspect) just exaggerated versions of real events, it is outrageously funny and thoroughly enjoyable; Burroughs sure knows how to spin a yarn.

Five on five but not recommended for anyone who takes offence easily or has a low threshold for vulgarity.