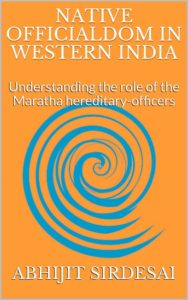 Centuries before India became independent, this Watan system had been widespread over the region.

Through this book, Abhijit Sirdesai attempts at discussing the role and chain of command of the Maratha hereditary officers. Also, it provides a commentary on the status of different officers in the hierarchy that they were accorded by the British on the basis of their rank in the 19th Century.

Presented with detailed maps and images, along with topics like grading order for revenue officers and their respective status, Native Officialdom in Western India also discusses societal customs and traditions and political affairs under the British while providing a definite note on the ancient history of the Western India region.

Also, there are discussions on certain rules and regulations that were crafted by the British and how these legal affairs affected the local rulers in the region. The arguments are backed by significant sources, some of the prominent records belonging to the Sirdesai family itself.

Native Officialdom in Western India provides an interesting understanding of the Watan system and how it affected the socio-economic and political system in Western India. For instance, possession of Watans among specific classes led to the assertion of dominance which led to further impact on the society as the readers will find while reading this book.

Topics explored in this volume relate to the administrative history, the judicial institutions, laws of inheritance, role of religion, commonness of superstition, customs and traditions, etc.

Along with dialogues on administrative and judicial institutions, the role of religion and other superstitious beliefs prevalent in the society are also explored.

Overall, the author discusses the various factors and events that led to the population’s present context, evolving socially, politically as well as psychologically across periods of time.

The language used by the author is lucid and the narration of the various administrative history and judicial system comprehensible and systematic.

This book has a foreword written by Dr. Teotonio R. de Souza who is a historian and the founder of Xavier Center for Historical Research, Goa. He is renowned for his great achievements in Maratha History. Also, quotes from a few prominent proponents of Maratha historiography has been provided within the book.

Any reader interested in the revenue and administrative system in Western India should go through Native Officialdom in Western India as the author tries to throw light on various topics that have not been discussed in depth before. Additionally, this informative book covers a part of the syllabus for the programme of PG in History in certain universities of India.

Can’t wait to read it? Buy your copy of Native Officialdom in Western India using the link below.