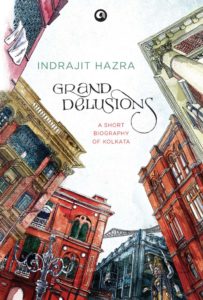 I’ve been reviewing quite a few books recently where a city is in the foreground of the story; be it Jeet Thayil’s ‘Narcopolis’ in which the ugliness of Bombay is beautifully portrayed; be it Neamat Imam’s ‘The Black Coat’ which is a satire based in Dhaka; or be it Omar Shahid’s ‘The Prisoner’ in which the rotten and corrupt government machinery of Karachi is exposed. But, because I have never been to either of these cities, I could only picture what I understood from the narration. I missed the fun of being able to say, “Oh! I know this place. I’ve been there.”

Though I’ve never actually lived in Kolkata, I’ve been there countless times and know the city well. So it was a pleasure reading Indrajit Hazra’s Grand Delusion, a short biography of Kolkata.

Indrajit’s book is neither a boring glorification of the city he loves like Edward Glaeser’s ‘Triumph of the City’ about Tokyo, nor is it a disgruntled citizen’s attempt to insult a city like Suketu Mehta’s ‘Maximum City’ about Mumbai. It falls somewhere in between these two extremes; a book which tells us why, in spite of all its faults, Kolkata is a great city, a city with a soul. ‘Grand Delusions’ is Indrajit’s remedy to his homesickness.

Grand Delusions is not a chronological history of Kolkata. It is an assortment of history, geography, art, culture, cinema, people, entertainment and nostalgia. Indrajit has written about things that define Kolkata; things which have become synonymous with the city. The Howrah Bridge, arguably the most recognised landmark of Kolkata, the underground metro, once the pride of Kolkata but now overshadowed by its modern cousins, Durga pujo, the grandest of all festivals, Bom Kali, the official goddess of the city, Satyajit Ray, the legendary filmmaker, Rosogollas, Park Street, etc. are narrated in detail with a lingering wistfulness. Major events that have shaped the city – British settlements, direct action day, Naxal movement, fall of the Communists, etc. have been touched upon.

Though not an impediment in my liking for the book, there are a few things which were either left out or were very miserly mentioned – trams, double-decker buses, hand-pulled rickshaws, College Street, Burra Bazar, and the likes. But as Ernest Hemingway had said about Paris, “The memory of each person who has lived in it differs from that of any other.” The same holds for Kolkata.

While reading a non-fiction, keeping the reader motivated to go on is a tough task, but Indrajit does it with ease. Not sticking to a single line of narration, he brings in rich history, interesting trivia, and journalistic opinion to make things interesting.

Grand Delusions is an interesting book and a very short one at that. Must read.