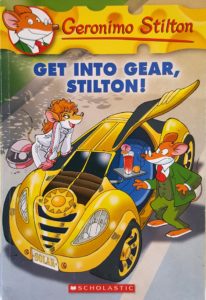 I am reviewing a book for the first time and I am also reading Geronimo Stilton for the first time. I think that this book Get into Gear, Stilton! is very funny and I like it very much. It has twists at two points in the book.

In the story of Get into Gear, Stilton! Geronimo Stilton meets with an accident and then he goes to the hospital and when the doctor finishes bandaging he goes to his office and there he meets the Mayor of the city.

The mayor asks him to give a demonstration after a week. But his driving license has expired and he has only one week to relearn everything.

Then he reaches to the driving school and after this, the story has a lot of funny parts.

After two-three days he finds the Solar car, and then Solar takes him to place she calls home, then he meets the team of Solar, then he goes on a mission and when the mission ends he reaches the ceremony in which he has to give a demonstration on safe driving and that is how the story of Get into Gear, Stilton! ends.